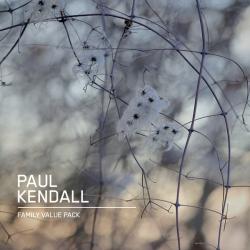 Paul Kendall has pedigree. Check out the people he has worked with as an engineer to see this. Even more importantly, he curated the Mute offshoot Parallel Series. He even helped Alan Wilder develop a live incarnation of Recoil. Spending time as a studio engineer amongst other things, it is easy to see why the lure of the spotlight had to happen.

“Family Value Pack” is a further product of this freedom – and it is obvious that this is an artist’s album – as in it won’t bother the charts, but will excite those who make music, and especially those who like electronic music with high production values.

The best way to describe what you are listening to is a set of different soundscapes, with the focus being on the voice. The interesting thing is it feels like you are not actually listening to the music, more like you are “in” the music. Take the second track “Water, It Must Be”, or “Ex.posed”, where you are placed right in the centre of the swirling synths, the spoken narrative making up the majority of the track playfully moving from left to right ear and back…

Some tracks do move into rhythmic areas, for those who miss their beats “It’s OK” becoming a slow dubby track around halfway through, and the opener “Scuba Dis Dat” being probably the most upbeat and rhythmical of the whole set. For me though, it is tracks like “Family Value” that are the most satisfying, with layers of sonic clicks, fragments of found sound and half-whispered words swirling around your ears like a kind of sonic soup keeping you listening, though you don’t really know what for.

It is an interesting album, quite undefinable, but sonically very interesting, thanks to the quality of the sounds involved. I enjoyed it, but would bet that many wouldn’t consider this music and give it a wide berth. For me though, I’m glad it exists, and at a push would describe it is freeform ambient electronic jazz – is it possible I’ve just labelled yet another strand of electronic music? You listen, you decide…