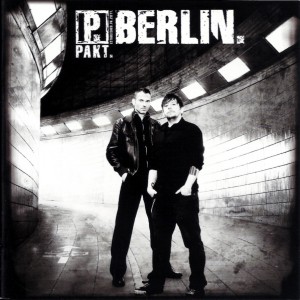 Chris Ruiz and Gio van Oli used to be members of And One. A lot have been said and written about their departure, let’s leave it at that. They are now PAKT.

Many have eagerly anticipated this debut album following the 2011 single “Freiheit”. PAKT and the production team of Mic Schröder and Cani Nickels wrote, produced and mixed the tracks. The obvious question is, does it sound like their former band? The answer is yes but mostly no. I think that “Outro” is the track where their heritage shows the most.

After the intro and the single track “Freiheit” the third track is the faster “Burn Home Burn”, then the bombastic “Schwarz und Weiss”, before my favorite track “Lichterloh”. It is followed by the slower “Grey Into Red” and “All Reminds Me”. Track 8 is “Egoshooter” and you can clearly hear echoes of DAF, Das Ich and Laibach. Throughout the album there are sampled parts, a bit old school but done in a nice way and in does not feel out of place in this kind of album.

Chris and Gio does not hide their extensive background. And why should they, it is classic EBM and hard synthpop, but it’s very varied both in structure, tempo and language. Everything is very well produced. In parts I feel that the cymbal production is a bit too elaborate, i.e. in the track “Revolution”, where the beautiful melodies become somewhat hidden. You really need to turn up the volume when listening to the album, not that I mind that (but my neighbors might). Co-producer Cani Nichels is even credited with playing “real drums”.

Chris Ruiz’s singing style is a bit like the whole album: it varies a lot. Take equal parts of Stefan Ackerman, Gabi Delgado, Richard 23 and Steffen Keth and add a hint of Trent Reznor and you’re close to the final result (but it is not uniformly distributed on the album). It lacks a bit of own identity; it is competent but I miss an own distinguishing tone and coherency. I like it though, in parts it is fantastic and in parts not so.

Track 10 is “Liebespakt” – sort of a band manifesto in ballad form, veiled in a story of love and life, well that is my interpretation anyway. The last track before the outro is “The Fish Rots from the Head Down” where the title is repeated over and over again in the chorus. I guess it is about the past experiences of the band members.

If you’re in to classical German EBM and bodypop you will undoubtedly find some gems on this album, being an old git I certainly did.