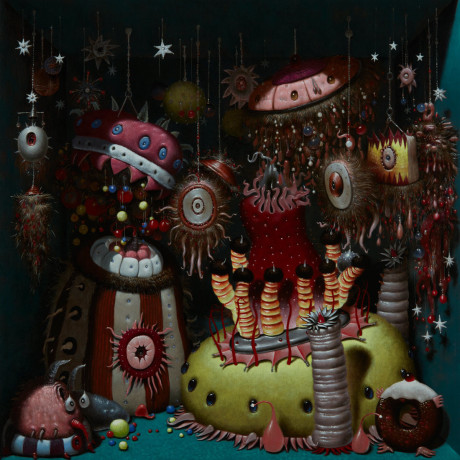 “Monsters Exist”, the title track opens this, Orbital’s latest jaunt into electronic music – and it is almost a return to the roots of the band themselves. There is no doubt that apart from a couple of darker tracks, this is an up-tempo rave album, and one of the best in years. So, to the title track again – the foreboding drums that pound through the opening sequence fade away into rave pans, before the mood is paired way back again, then rebuilt. Both “The Raid”, and  “The End Is Nigh”, have similar dark tinges, with the latter being made up of spliced vocal clips being overcome by a barrage of rave horns once more – if music was a weapon, then Orbital are more than armed and ready.

Orbital have given us some classic tracks over the years – from “Chime” and “Belfast”, via theme tunes like “The Saint” to anthems such as “Satan” – most electronic heads could chart their lives by what Orbital track was in the charts at the time. We would forgive the Hartnoll brothers if they just decided to hang up their cables and synths now and play the odd DJ set from time to time, but this, their 9th studio album is proof that the won’t be happening any time soon.

Back to the album; “Hoo Hoo Ha Ha”, in the nicest possible way, reminded me of a skipping CD – except one where all the elements of the track seemed to be jumping in perfect rhythm, before rave trumpets brought a joyous feel to proceedings.

“P.H.U.K.” is an instant classic – you know it as soon as the hyperactive synth line kicks in. It is instantly Orbital, it is instantly hands in the air, and simultaneously chills down the spine – reminding you of the times of acts like Tricky Disco and bleep techno; this is probably my track of the year so far. Another favourite, and quite unexpected, is the final track “There Will Come a Time” featuring Prof. Brian Cox – a genius collaboration in my opinion. The track is majestic, soaring and again as uplifing as being back in that field with thousands of others, their hands in the air, reaching for the stars and living for the moment.

Having wiped that nostalgic tear from my eye – back to “Tiny Foldable Cities” – a track that sounds like a slightly paranoid Sega game console – the off-kilterdness of the track keeping things interesting while the beats keep the body moving. This computer game styling seems to be a theme through the album, as “Vision OnE” has a slight chip-tune quality to it, bouncing along in cartoon-y fashion as it does.

Could this be the best comeback they’ve done? I actually think it could be about the best album they’ve done – there is such variety and polish to tracks that almost any one of them could be worthy of single release – time doesn’t stagnate in the Hartnoll brothers case, instead it seems to create more ideas – this duo, like fine wine,  are just getting better as they get older.