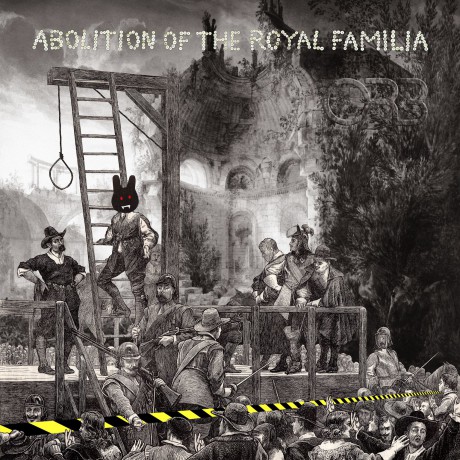 Abolition of the Royal Familia

To say life gets better after thirty is an understatement in the life of the Orb. It seems that turning 30 has invigorated the collective, and especially its prime member, Alex Paterson. The output has been phenomenal, as well as the critical praise, and they have been (until recent events), as busy on tour as ever. Paterson has taken under his wing another new member to main songwriting duties on this new album, the previous tour musician and sound engineer Michael Rendall.

The album starts off quite funkily and funny with “Daze – Missing Messed up Mix”- featuring soulful vocals from Andy Cain over a washed background and funky bass groove – definitely a continuation of the anything goes approach that was adopted on the previous album. Cain also features on the slightly dull second track ”House of Narcotics – Opium Wars Mix”.

“Hawk Kings – Oseberg Buddhas Buttonhole” is a step back to the more classic Orb themes, and part of that must be down to the inspiration of Steven Hawking. I am sure Paterson was really happy when he found out at a lecture that Hawking actually used to listen to his band. File this alongside something like “Assasins”…

Other tracks of the classic Orb style include ”Pervitin”, which takes us right back to the blissed out washes of ambience that the Orb rightly became famous for. I haven’t heard anything this good from them since the classic “Ultraworld” album – a smoothly lulling drone of orchestral sounds act as a bed to the sampled and textured voices that sit on them – female voices speaking in German and Italian amongst other utterances – a highlight of the set.

“Afros, Afghans and Angels” takes the familiar searching through the channels of radio, and lands us in West Norwood, where we hear another slice of stunning ambience. It is this that the Orb do so effortlessly, this track really is quite beautifully textured – another highlight. The best is ”The Weekend It Rained Forever” though. It starts off with the aforementioned rain, before moving off into another glorious ambient track, swept along by pregnant piano chords and synth patterns.

For the rest of the tracks there is a more dub and beat driven aspect. A lot of it is OK, but only occasionally does it reach the heights of the sublime other tracks. “Shape Shifters (In Two Parts)” slowly starts to turn from early morning sunlight into full on dub music. As an experiment it’s interesting, but I think I preferred the former’s blissfulness to the second part’s bounce.

“Say Cheese – Siberian Tiger Cookie Mix” – Starts with the “Cheese” sample straight away, before melting into a concoction of dub and seemingly Chinese samples and singing floating over the top. A more pleasant dub trip. ”The Queen of Hearts” is the Orb taking the jungle music route, and creating a track that fits nicely with the samplings of Paterson; it’s not complex but it works well.

“Ital Orb – Too Blessed to Be Stressed Mix” – beats and strange noises abound in this infectious track, which has something of the mischievous about it. It’s a very playful track, with all the usual elements present and correct, and even England World Cup football commentary thrown in for good measure. ”Slave Till U Die No Matter What U Buy” closes the set with yet more ambience, which ends up becoming an Orb version of Jello Biafra’s (Dead Kennedy) famous track “Stay in Your Homes”.

More than anything else, it is great to see that the musical quest to expand the limits has not been lost by Paterson, and therefore the Orb. Maybe the knowledge that you are a master at something means you try to do other things, simply knowing you can do that that you have mastered whenever you want. So it seems with Dr. Alex – a man who continues to push boundaries rather than orbit the same “Ultraworlds” (though he does seem to pop back now and again).