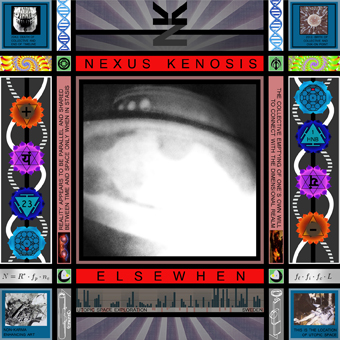 Henrik Nordvargr Björkk has been active in the industrial scene for a long time, with both EBM pioneers Pouppée Fabrikk and the tribal noise ambient outfit MZ412, as well as a whole bunch of other projects. Now he’s created a new musical identity called Nexus Kenosis which takes the industrial force of Skinny Puppy and The Klinik and marries it with modern electronica. As it turns out, it works well.

The music on “Elsewhen” is not for light consumption, you have to work a bit for it. This is part of the appeal, and every time I listen to it I discover something new. Henrik is an avid user of the distortion box, but he does it with finesse and doesn’t just drown everything in it as some other contemporary bands do. Broken beats rumble underneath Henrik’s processed vocals together with chaotic electronic noises creating a fascinating soundscape. At times he brings out the ambience too, as in “Nekro Nekton” – my favourite track where an infectious rhythm is the perfect backdrop for the fat pads on top. Other times he brings forward the 4/4 beats and the fast bass lines, cranking out some EBM – but this time it has a more of a tribal feel to it. The distorted beat tracks focus more on creating a rhythm than just creating a noise barrier and makes it listenable even to me.

This is a very promising direction for Henrik, and fills a gap in the market for me in that it’s got traces of old school industrial while also bringing in modern sounds and styles. It’s noisy and experimental but also sort of friendly. He even gets some bonus points for singing in Swedish on “Gestalt”.