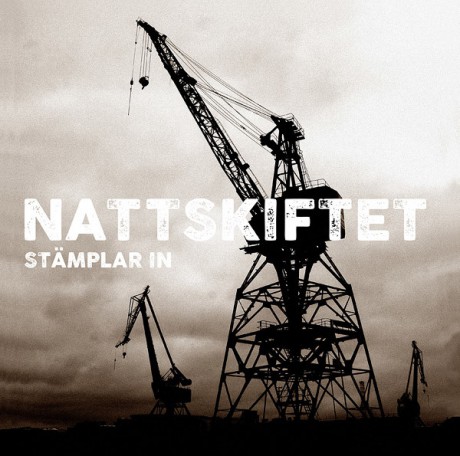 Brothers Christer and Lars Björndahl have been a part of the Gothenburg synth scene since the 2004, creating music in various constellations and organizing underground events. They make up the Nattskiftet line-up together with Anna Johnning and Tobias Eliasson. This is something quite different from their previous efforts mostly associated with italo disco and their Disco Digitale project. “Stämplar in” is full on EBM and packs quite the punch.

The instant appeal of Nattskiftet is the alternating vocal routine where Christer and Anna take turns by the mic, giving them dynamics not heard in many other body acts. And, of course, their lyrics in Swedish about working class tribulations, slaving away in dirty factories with thundering machines. A foundation of carefully crafted bass lines make up the backbone of each track, in part very close to masters like DAF and Nitzer Ebb, but Nattskiftet hold their own with more variation and the occasional melody. “Stämplar in” is in many way the first of its kind which only makes it all the more interesting. I won’t name any favourite pieces here as I love them all. That’s right, this synthpop freak has drifted at a steady pace towards EBM and minimal synth. Twelve pounding synth whirlwinds of this calibre are hard to resist for anyone into electronic music.

“Aceton”, their first EP, was released six years ago so the and Rotersand’s Krischan Wesenberg (co-production, mixing) took their sweet time. “Stämplar in” proves this was a smart move. Don’t release anything until you’re completely satisfied. The ending piece is a beautiful spoken word-like homage to the distinguished institution Götaverken, a legendary shipyard in Gothenburg close to both the band’s studio and the Release Magazine HQ. The complete album serves as an anthem for the struggling working class and their essential labour. None of the members work nightshifts in factories though, (Anna, for instance, is a mathematical scientist) but that is not important. It will be interesting to see where Nattskiftet go from here.