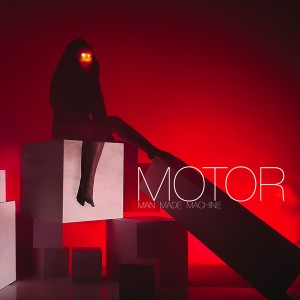 I really want to love Motor. They have an awesome sound, great guest vocalists and generally create good vibes. The problem is that their speciality is tracks that never go anywhere. Every song I think to myself that “It will kick off any minute now!”, but it seldom does. “Control” on the album is truly an exercise in control, as it almost painfully reigns in any sign of momentum. Monotony should work very well with Motor’s brand of techno body music, but for some reason they rarely hit the spot. It’s a lack of energy, or focus.

Two guest vocalist are featured here, and I bet you’re very familiar with both. First off, we have Martin L. Gore, putting in a nice performance on the album’s best track “Man Made Machine”. This is one of those occasions that they get it right, with both a strong riff and a great melody. The other guest is none other than Douglas McCarthy, on “The Knife” a suitably EBM tinged little number that doesn’t manage to go all the way. It has no bass, just bass drums and some twirly synths. It just sounds a bit off, and stops and starts all the time. Maybe it’s because I’m used to hear Douglas’ vocals on top of a full-on action background, and Motor is much more subdued. Maybe I should applaud them for not taking the easy way out, but I just feel frustrated. Maybe it works better in a club?

They do manage to get it right in other places though, such as “In the Dark” and the opener “Messed Up”, but even these are tracks I don’t take with me after I turned the record off. If you like your techno body music on the minimal side, check it out.