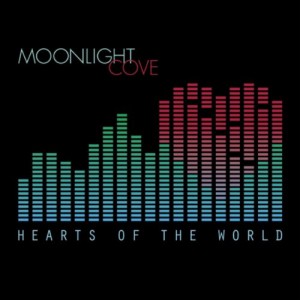 Hearts of the World

This Swedish synthpop trio kicked off their career in style with their debut album “Orphans of the Storm” back in 2008. It was a superb effort resulting in a 9/10 from us, and some tracks are still on rotation in my playlists.

Fast forward to 2012, and the boys have just finished their sophomore album “Hearts of the World” which continues down the same path as its predecessor. Blippy, solid, slick synthpop with a really strong vocalist – not that common in this genre. The’ve managed to create another strong album, but I do have some reservations.

I don’t know if it’s a conscious effort, but to me it seems like they’ve tried to make their music radio friendly, and this means a lack of “edge” or whatever you call it on some tracks. Especially on the ballads, which are a bit too sweet even for me. We still get some riveting upbeat songs like “Hero of Mine” and “Moment of Light” though, which balances it out a bit. And don’t get me wrong, I have no problem with Moonlight Cove being played on the radio, it’s just that it seems like they’ve removed some of what made them so great to get there.

The high points on the last album are a bit higher, and the lowpoints on this are a bit lower. But rest assured it’s still excellent synthpop.