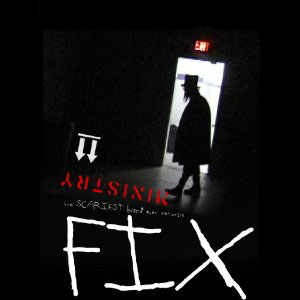 I personally started doubting that this Ministry documentary would ever see the light of day quite a while ago. Social network PR etc. has been going on for years and apart from random screenings at obscure film festivals, that I personally could never attend, this motion picture was consistently kept away from the public – until now.

Ministry as a band/concept needs no further explanation, especially not to readers of Release Magazine. The band was formed back in 1981 and most part of this decade Ministry was a quite poppy musical experience. It was in the year 1987, with the release of the legendary “The Land of Rape and Honey”, that the sound was changed into what we generally associate with Ministry; blasting guitar riffs, merciless rock beats and psychotic, chanting vocals. I.e. the by now over copied blueprint for the American version of industrial (rock) music. During this transformation Jourgensen also started drifting further and further into his notorious heroin addiction.

Director Doug Freel has now compiled lots of footage, mostly shot during the 1996 “Sphinctour”, and mixed them with interviews with people like Trent Reznor (Nine Inch Nails), Lemmy Kilmister (Motörhead), Jonathan Davis (Korn), Nivek Ogre (Skinny Puppy), Dave Navarro (Jane’s Addiction), David Yow (The Jesus Lizard) and Mynard James Keenan (Tool). Other famous/infamous people like e.g. Timothy Leary and William S. Burroughs also appear. It is, of course, very nice to watch all this people paying their respects to Al Jourgensen but overall this film focuses way too much on the rock circus lifestyle and the substance abuse. The actual importance of Ministry as a band is kept in the background and most of the footage of him is shot in outrageous after-show, backstage conditions. I am tempted to believe that this is a smart trick by Al Jourgensen himself, to let himself be exposed like a spitting image of the tragic rock’n'roll star. Or like an artistic satire of the cliche, if you like.

The image of Ministry and also Al Jourgensen himself has been the standard “live fast, die young” theme  for years but this film also shows a deeper, tragic pose of this front person of industrial rock. A portrait of an intelligent person escaping boredom in the same way that’s dug enough graves throughout music history. Luckily, Jourgensen is now clean and I think this fact is part of the reason that this film could be released in the first place. If he wasn’t, this motion picture would certainly have been evidence enough to force him off tour and straight into rehab.

While I, as stated above, find that this film is digging a bit too much into the sleaziness of touring it still leaves a deeper impression and it certainly doesn’t give me a glamourized picture of decadent living on the road. Yet, Ministry’s overall concept is based on this burn out lifestyle and I am still not sure that the picture of Al Jourgensen in this film is actually real, but, like Tony Wilson once said: “When you have to choose between the truth and the legend, print the legend…”.

As a nice little bonus there is also an album, entitled “Fix This!!!” put together by Paul Barker, Ministry member between 1986-2004. On this release he’s got help from different people, all more or less connected to Jourgensen in some way: Taylor Momsen, Nivek Ogre, Chris Connelly, Alexis S.F Marshall, USSA Deadly Apples, Voltergeist and Jeffrey Kinart. Be sure to check it out!