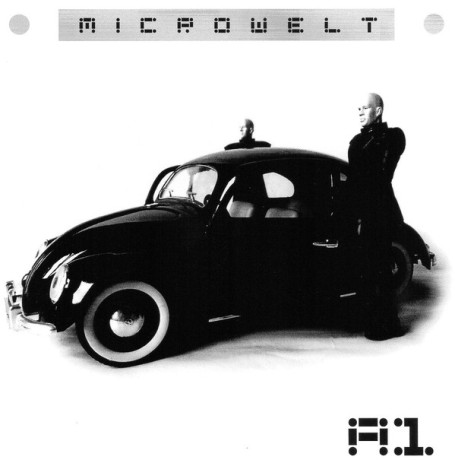 Who can deny the overwhelming impact of Kraftwerk on our beloved genre? Newer bands adopting their formula have existed ever since the legends’ golden days, but it seems recent years have seen a surge of countless clones. One of them is Germany’s own Microwelt. A duo dressed in black and striking all the right poses. “A1″ is their official CD debut after a self released CDR and avery pricey 7″ single on minimal synth label Hertzschnitt.

“München-Leipzig-Berlin” delivers what we are used to in this Düsseldorfian subgenre. Minimal electronics, heavy vocoders and lyrics about travelling. Thoralf Dietrich and Martin Sass know their machines and use them to great effect. All through this five track EP the majestic shadow of their masters are present, but they manage to steer away from being just a mere tribute band as they are so technically gifted.

I do have an issue with the vocals though. They use a specifically heavy vocoder style they utilize in all five tracks. More variation in that department, please. “A1″ still does a good job of dampening the worst utopian fantasies of new material from Ralf Hütter’s band of touring robots.