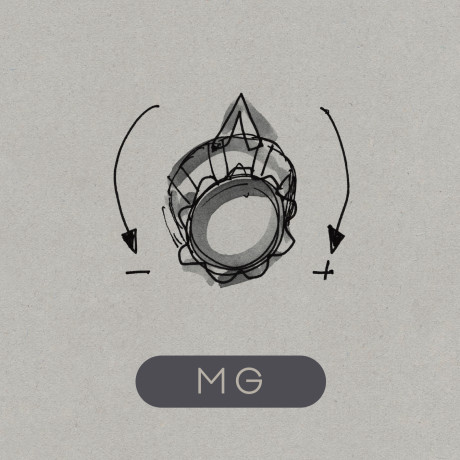 When I received the promo in February, I immediately thought “Counterfeit 3″. But I quickly realized that this was something completely different.

Martin Gore has kept his personae MG from the collaboration with Vince Clarke VCMG, so my next thought was that it should be minimal electro but when I heard the first track “Europa Hymn” it was obvious that this is something entirely new. A collection of 16 instrumental tracks; very filmic and atmospheric yet minimalistic in parts, sometimes laced with pads and drones. Almost as a cooperation with Vangelis or John Carpenter, e.g. sci-fi-esque and in some parts very familiar sounding, either as instrumental Depeche Mode interludes or VCMG tracks. When I read more about the project it became clear.  Some songs – “Elk”, “Featherlight” and “Brink” – are all tracks from the production of Depeche Mode’s “Delta Machine” album that didn’t make onto any of the various releases related to it. Probably due to the fact that there are two song writers in Depeche Mode nowadays and less room for instrumentals.

Following the end of the Delta Machine Tour, Mr. Gore went straight into the production of “MG” and the principal recording was finished last November. Keeping the producer from VCMG – Q, aka Überzone – the grit and dark ambience from the previous VCMG work is still intact. I like the production work, it is subtle yet a bit gritty and has a looming darkness merged into the tracks (a difficult combination). So how should one describe an instrumental electronica album from a lyric composer this prolific? It is a difficult task for me. I really like some parts while others don’t do much for me.

Various Eurorack modules and modular systems have been used and some parts are really interesting and in a few places I got the evil thought that it was almost a test of the gear and not as much a thought developed into a track. First of all, for me the album has four intros before any kind of beat is revealed in “Brink”, all of them have merits and could easily have been added as instrumental interludes on any of the last four or so Depeche Mode albums.

This is a bit of a revelation for me. I know of course that Martin always have written most of the instrumentals in the past but to me they were, maybe naively or correct, collaborations between all band members and the production team. Now I tend to think that they are the brainchildren of Mr. Gore. I know that Martin has an obsession with musical gear, Christoffer Berg said that there were new parcels delivered in every single day he spent in the studio during the production of “Delta Machine”. It is nice to hear it was put to good use.

The journey through “MG” takes me through a lot of various emotions and imagery of bleak futuristic landscapes. All the titles consists of one word except from first single “Europa Hymn”. As I said previously the album opens with four tracks that could be used as intros; “Pinking”, “Swanning”, “Exakt” and “Elk”, the first two and the fourth sharing a bit of the soundscape and to me they don’t sound quite finished. There are more layers in “Exalt”, but maybe that is also deliberate, to distill the layers to the bare minimum necessary for evoking pictures and emotions.

When fifth track “Brink” kicks in with its harsh and driving pulse I feel that it could be a VCMG track and I like it a lot. More of the same are “Crowly” and to some extend “Featherlight” and “Spiral”.  The rest are slower more atmospheric tracks that sometimes build from a quite minimal setting into almost bombastic venture like for instance “Southerly”, which simplistic hi-hats made me think of Kraftwerk and the percussion part of “Featherlight” even more so. The end of “Exalt” made me think of “Fun to Be Had” with Nitzer Ebb. I know Martin Gore is an avid Aphex Twin fan, which I guess you can hear in parts.

My favorite tracks are; “Brink” – the uptempo techno tune, a little bit like discovering the hidden room in a maze and facing the end boss (R-Type on speed), the obvious intro song “Islet” with a simplistic melody just as effective as the melody from Close Encounters of the Third Kind waiting to be answered, the pumping “Spiral” and “Crowly” and the similar sounding quartet “Exalt,” Trysting”,  “Featherlight” and “Blade”, beautiful soundscapes filled with bleakness, empty void, endless reverb, but yet a simmering sensation of hope lurking in the sound and melodies. Did Martin Gore even write a song in a major key? Surely not…

I think that avid electronica listeners will appreciate the collection of tracks, especially if they have a weakness for science fiction. I think “MG” could be used in its entirety as a soundtrack for a sci-fi movie. As a regular album I would have stripped it down to perhaps ten tracks.