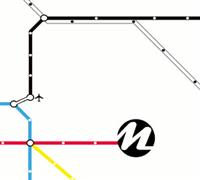 Inspired by Komputer, Metroland takes the Kraftwerk aesthetics and sound further. Like Komputer, they also seem to be very smitten with London, in particular their public transport system. Song titles like “Mind the Gap”, “Harry Beck” (the man who designed the famous map of the London Underground) and “T.F.L” (Transport For London) are very telling. Metroland are Belgian and not UK natives, but I share that same love so who am I to talk?

The two members call themselves only “Passenger S” and “Passenger A”, and they are very open about their influences (and well, it would be downright stupid not to in this case…). And I have to say, I like what I hear. They have a knack for creating memorable riffs and themes and the sheer analogue joy pouring out of the speakers is very contagious.

The music is filled with hyper electronic rhythms and so many bleeps and bloops you could fill up the entire London Underground.  There are many catchy tunes with robotic voices and if you want you can also get a special double disc version with a whole truckload of remixes. For example one by Komputer themselves, which seems fitting.