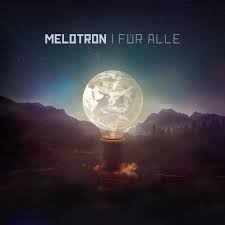 When I started listening to ”Für alle”, I thought ”wow, they’ve gone back to pure electronic synthpop”. In my opinion, the Melotron output has taken a quite dramatic downturn in recent years, moving into a bland production style with middling song writing and a sore lacking of their trademark melodies. So I was hoping to see a return to form. Unfortunately it isn’t.

To be fair, some tracks hint Melotron greatness of yesteryear, such as ”Alles aus Anfang” and the first single ”Menschen”, both located towards the beginning of the album. It mostly trails off from there… It’s like the pieces are there; the fat bass, electronic bleeps and everything you used to like – except they’ve forgotten to make things interesting. The choruses are forgettable, songs just ”exist” and nothing stands out. Also, Andy Krüger’s vocals don’t really hold up anymore; it is very noticeable in the track ”Sleep Well”.

Ah well, at least it doesn’t diminish the great heights the Neubrandenburg trio reached back in the days with the albums ”Weltfrieden” and ”Sternenstaub”, even ”Cliche” maybe. After such lofty ambitions, disaster finally struck with ”Werkschau” where they totally destroyed their old songs with bad remakes. Seems like that’s where the fall started. Let’s hope Melotron can rekindle the good times in the future.