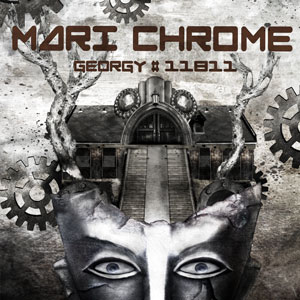 “Georgy #11811” is the cryptic title of Mari Chrome’s debut album, inspired by the movie “Metropolis”. Mari Chrome is a duo consisting of Marion Aseema Küchenmeister, vocals and lyrics, and Kai Otto, composition and programming. If Marion’s name rings a bell, it is probably because she used to be the singer of the synthpop band Invisible Limits – you’ll undoubtedly recognize her beautiful voice.

There are 11 tracks on the album and the style is synthpop with a darker mood, almost gothic sometimes, i.e. “The Seeker”, with layered vocals and epic trance like leads and melodies. The album could be divided into 2 parts, the first being faster and more dance orientated and the latter slower, more melancholic. It is not groundbreaking music, but it is rather nice in parts although a bit predictable sometimes.

There are 2 covers on the album, the first being a upbeat pop version of the Cure’s “A Forest” which is actually very nice and I would gladly play it at any dance floor. The other one is “Blue Monday” by New Order, which I don’t understand at all. In m view they have shredded all parts of the original, thrown away the elements that makes it a mega hit, taken the tempo down and, don’t get me wrong, at times this might be a formula for success: But not this time though, not for me, I just want to skip to the next track which can’t be a good sign.

The album is produced by legend John Fryer and the music sounds fantastic, however I believe the vocal production leaves much to be desired here and there. On some tracks the sharp S-sounds are almost unbearable for me. I have tried to listen to the album on as many different setups as possible: iPod, computer, hi-fi, home studio monitors, PA and in the car – and it is more or less the same on all setups. Also I have doubts about the addition of delay on Marion’s beautiful natural vibrato.

My favourite tracks on the album are “Toxic”,  “Running Wild” (Barack Obama, I think, samples included) and “The Seeker”. If you like old-school German synthpop and darkwave with a dance beat and was a fan of Invisible Limits, “Georgy #11811″ is an album for you.