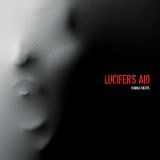 I wasn’t that taken in with Lucifer’s Aid’s debut album “New to Reality” which I thought sounded a bit too ”cliche” dark industrial. Luckily enough, Swede Carl Nilsson – also known from Operating Tracks – has developed his sound on the follow-up ”Human Rights”, an album that grabs me from the get go. Programming and sound design have stepped up a couple of notches, and Carl creates a sort of claustrophobic, intense monotone grind that just won’t let go.

My bet is that Carl has listened quite a lot to the Klinik, because that’s the sort of vibe I get from ”Human Rights” on a lot of the songs. ”Fractions” for example, could be from the classic Klinik album ”Time”. It has the same minimalistic take, with lyrically simple distorted vocals on top – as does many of the tracks on ”Human Rights”. Sometimes more atmosphere pops up as well, where ”Future Mess” being a prime example and my favorite tune.

Being an old fart means I have a soft spot for old school sounding industrial, so this hits a nerve with me. Unfortunately the songs all blend together because there’s really not that much variation. But has the skills and if the quality keeps going up the future looks bright.