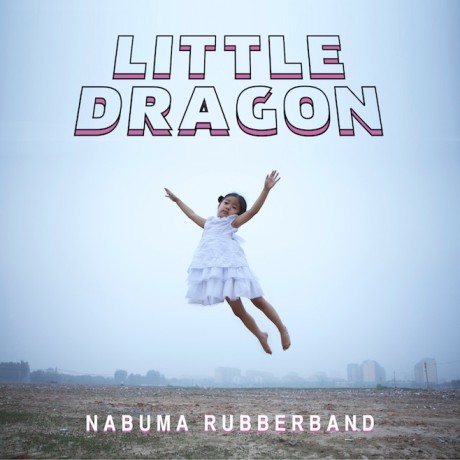 Little Dragon. One one of my favourite acts of recent times – an act I discovered at Sonar, and have followed ever since. Being that I am such a big, big fan of their past output, I have to say it is with a bit of trepidation that I come to this new longplayer “Nabuma Rubberband”, just in case it doesn’t live up to my high expectations. Thankfully the band is still made up of the same four school friends who met in Gothenburg, Sweden all those moons ago, so no worrying line-up changes.

Let’s get to it then… The obvious track to talk about is “Klapp Klapp”, the first single, and first standout track of the album. It punches hard, and never has the lead singer Yukimi’s voice sounded so clear and light. There is something of a touch of Prince about this track, as well as the usual electronics I know and love – almost like the Purple One was indulging in a bit of a musical battle with the Kraftwerk robots. ”Let Go” is the band doing what they do best, mixing it all up into a glorious sonic soup – the album ends with it bubbling away. “Paris” is glorious, with uplifting soulful vocals over pumping rhythms and driving beats – it is the most Little Dragon-ish track here, and one I will be listening to again and again, I’m sure. The band continue to effortlessly blend styles together and really put the musicianship part into their roles of electronic musicians.

There is clear evidence of the Janet Jackson slow jams rumoured to have been an inspiration for this album across a few of the tracks – none more so than on “Pretty Girls”, and the unusually-named title track. Interestingly, there is a darker feel to some of the tracks here too; the first track “Mirror” and “Killing Me” are both dark in sound and subject matter – a development I wasn’t quite expecting, but quite liked – I hope to hear more like this in the future.

A word of warning though – I hope that some tracks here are not predicting the direction the band is intending to go, and lose the quirkiness that I associate with them. “Underbart” (means Wonderful) is a great club track for instance, but a little too much like many club tracks I have heard before, even with the lovely slowing down of the track to fade at the end. “Only One” is also one of those tracks that just washes over me without connecting – it is a little too long in the build up, and again ends up in four-to-the-floor territory before seemingly exploding.

“Nabuma Rubberband” is a great album and no mistake, and one I’m sure I’ll be playing for the months to come. It deserves to be listened to by the masses, and probably will be. Though hopefully the masses won’t turn away from the unfamiliar, as to me this is what Little Dragon do best – keep it quirky out there…