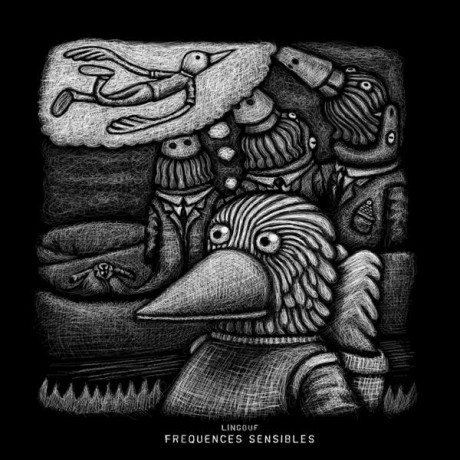 Let’s start right at the beginning with this, as it is one of the most interesting opening tracks I’ve heard in a long time – at first it sounds like you are listening to a field recording – there are dogs barking, floors creaking and such typical noises – however, listening carefully you realise that all is not what it seems, the dog barks change pitch, the creaks stutter, then a creaking door slowly opens…

…and we are into the world of Lingouf, which turns out to be just as interesting. Harsh soundscapes juxtapose with jazz singers, heavy beats play along to affected rhythms, and everything, no matter how harsh, is extremely listenable.

Lingouf is actually Vincent Ingouf, a very talented artist and electronic musician – as much influenced by NIN as he is Aphex Twin, it would seem – and more than at home on the Ant-Zen label.

Back to the album. There is a focus on the heavier side of techno to almost industrial noise here, but it never becomes unpleasant, which is one of the easy things to happen in this genre, similarly the music evolves enough to never become monotonous and boring, packed with vocal snippets, strings, and field recordings – another key factor in this genre that many fall foul of. This is all the more worthy of note when you consider that most of the tracks on this album are near 10 minutes long (in fact the shortest, the IDM-like “Un Arbre” is still a substantial 5 minutes).

“Lecon de Danse Emotionnelle” is my favourite without a doubt – it is funny and hard as hell – in fact everything that is good about this type of music we love – it could easily make my best of for the year (and I’m sure it probably will). Without trying to pigeonhole the track it sounds like Aphex Twin taking his synths on a holiday in Paris and recording the atmosphere while sipping café au lait on a terrace.

Listen to “Faim du Monde” or the title track itself to realise the talent this artist has and you too might be sucked in to the world of Lingouf – a barnstorming release, one as playful as it is hard, and one that deserves a bigger following than just fans of the genre.