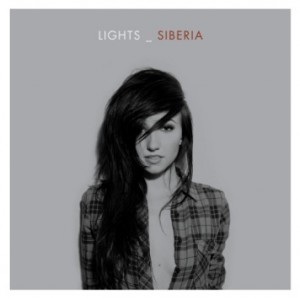 I missed “Siberia” when it came out in the fall of 2011, so I’m taking advantage of the recent UK release of the album to write about it now. Just because it’s probably one my favourite albums of 2011 (but I might use this to sneak it in on my album list of 2012, just so you know).

Lights is basically a one-woman project by Lights Poxleitner, a young Canadian who make simply brilliant electropop. She started out by getting a publishing deal at the tender age of 16 writing songs for others, before her debut album “The Listening” came out in 2008. It was basically her, a bunch of synthesizers and a guitar.

Citing influences like Depeche Mode, The Cure, The Knife, ELO, U2, Supertramp, Deadmau5 and Skrillex as well as nu metal, hardcore punk etc, she’s one of the new breed of musicians reaping the benefits of the digital world where the influences almost are endless.

“Siberia” goes way beyond the debut by going grittier, dubsteppy and generally sounding more mature. Her pop sensibilities have sharpened and she and her trusted writing companion Thomas “Tawgs” Salter are joined by Canadian indie-electro band Holy Fuck who are lending their producing skills to mess up the sound a bit, bringing in more dirt and depth.

After the distorted, uptempo title track kicks off the album in style, the gems just keep on coming. From synthetic ballads via furious futuristic disco to bubbly synthpop with heavy dubstep in between it’s a wild ride from start to end, with Lights sweet, clear voice hovering on top. Clocking in at 14 tracks it does trail off a tiny bit towards the end, but this album makes me more excited than I’ve been in a long time. Experimental, alternative pop at its very finest. In a perfect world, this is the kind of artist that blows up and goes big, not some crappy girl backed up by a marketing team or a TV jury.