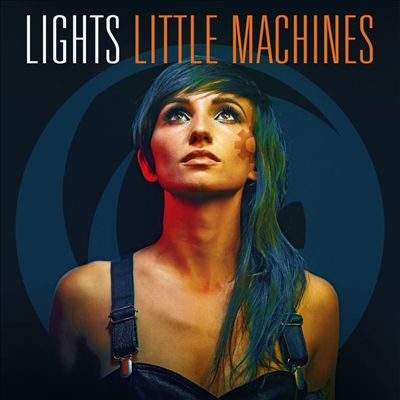 I loved Lights’ (born Valerie Anne Poxleitner) former album “Siberia”, a fresh take on electropop that mixed commercial ambitions with indie sensitivities and electronics into a very satisfying cocktail. It was one of my favourite albums of 2012 (although it came out in Lights homeland Canada in 2011).

After a brief hiatus – she just had her first child – Lights returned with the poppy single “Up We Go”. It’s a lot more lighthearted and positive than her previous material, and it proved to be an indicator of the whole album “Little Machines”. It’s still very much electronic – although there are probably more guitars present, especially on the brilliant 80:s tinged second single “Running with the Boys” – but Lights has said herself that she wanted to be more experimental on “Siberia”, whereas this time she wanted to focus on the melodies and song writing. And it shows, this is “music for the masses” in a slightly more obvious way, and the sound is perhaps more inspired by the current popular indietronica / chillwave movement.

So, is it any good? Well, yes, but it doesn’t quite reach the lofty heights of her last album. I will always be a sucker for great melodies and Lights surely delivers on that aspect, but I preferred the crazier production of “Siberia”. The new material’s sound is a bit more “slick” in comparison, but it’s not watered down.

Case in point, the opening “Portal” is electronic ballad perfection, and “Muscle Memory” is blippy classic synthpop in a way that not even Erasure conjures up on their latest album, and so is “Meteorites” – all of them creating a warm, analogue, fuzzy feeling in my body.

While some might object to her aims of creating great pop songs that appeals to “the masses” it’s also obvious that it’s what she wants to do, since she’s in complete control of her music. “Little Machines” will very likely end up on this years best-of list too. Check out the deluxe version by the way, it’s got 3 bonus tracks that all continues the electronic pop path in style.