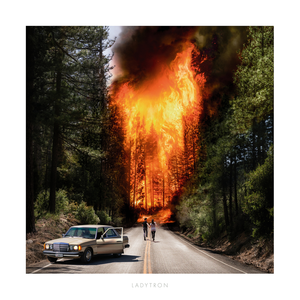 At some stage in your career, you contemplate the self-titled album. Some bands don’t do, some do – but it’s contemplated. The self-titled album always seems to be the honest, no hiding album, the “this is us” album. That brings us to Ladytron, who have just done the same thing. Now, a brief recap for those who might need it (well, it has been 8 years). Ladytron are a four-piece from Liverpool, but unlike the other four-piece from Liverpool, synths are their weapons of choice.

So, for the album then. There is no gentle beginning as the first track runs towards your ears, eager to climb in and grab your attention with the bleak yet harmonious “Until the Fire”. The next track, which just happens to be the single ” The Island”, changes the mood to an almost classic Ladytron sound – very analogue synth and lush vocals – optimism in an age of pessimism? Well, the refrain at the end goes “We are savages”, so I’m guessing not.

What I like about the album is the juxtaposition of the music and the lyrics; sometimes the music provides the gloom, and the lyrics raise everything up, more often it is vice versa. For me this is when the tracks work well, disco synth beats bounce away in a jolly fashion, but then you take in what they are actually singing.

Why “Paper Highways” wasn’t made the first single I don’t know. The song comes on like a piledriver, with a great drum track backed up by corroded synths and a strong energy. The sounds cut in and out of the vocals, leaving them at times bare, and at others fully submerged in sound – a cracking track. “Deadzone” is another great track. Possibly based on the Stephen King movie of the same name, there is an urgency to the track that demands your attention. “You’ve Changed” is probably the most Ladytron of all of the tracks on here, it pounds along and the lyrics remonstrating with you the whole time “You’ve changed, what were you thinking, you’ve changed”, with back up vocals soothing the jagged edges off.

Unfortunately, I find that some of the tracks, although good, don’t tend to keep my attention. As the vocals and synths can be very harmonious, tracks can just slip by without you really noticing them. As I said, not in an unpleasant way, but they don’t catch your attention like other tracks – this was the case with “The Animals”, “Run” and “Far from Home”.

Overall, the album is good. It’s clever, it is very much Ladytron, and surprisingly dark too. As always, when they hit their stride, Ladytron make great, great music, and at their worst merely very good. A band you can bank on, and another good addition to their catalogue.