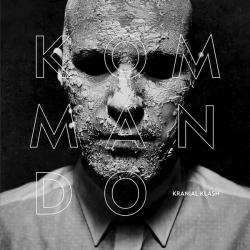 Dan Courtman offers up supremely industrial music, it really is Industrial with a capital I. There is anger, noise, electronic scrapes and titles such as “Corpses in Gasoline” to contend with – it’s not a happy album as you can tell…

Kommando is the moniker for Dan Courtman’s pre-Thorofon project, an act that released 2 CD:s and 2 cassettes the first time around. The focus is on distorted electronics with distorted vocals, sometimes with beats, sometimes angry washes of sound. It is not easy listening.

“Saint’s Heaven” is an interesting build up of sounds, but it doesn’t really sit with the distorted vocals which are shouted over the top. There is something about the vocal delivery which really grates me, and unfortunately there are too many tracks where this uncomfortable alliance of vocals and sounds rub against each other – maybe that’s the effect Courtman is going for. But for me it feels like sandpaper on my ears.

“Crocodile” is for me a harsh track – as harsh as anything on here – but there’s something primeval about it I quite like. It uses its power in the right way, and the vocals generally compliment rather than distract – how I wish more had been like this. “Akute Bokhoror” also pushes and probes with its oscillating noise throbs – I want to like it, but I can’t bring myself to do it.

I’m sure there are people out there who will love this kind of thing – but for me this is noise for noise’s sake, there is too little for me to hang on to for this to be anything but a headache-inducing journey, and true to form I end up with a Kranial Klash of my own – I’m going for a lie-down…