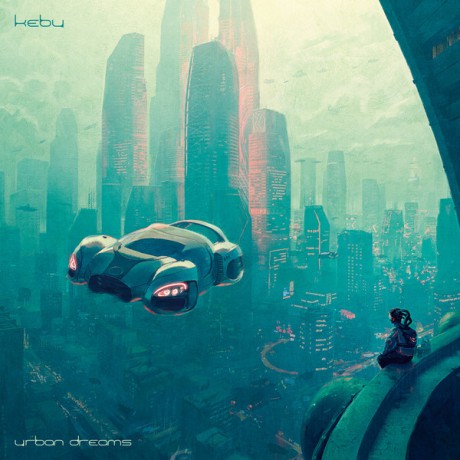 A lot has happened for Sebastian Teir, more widely known as Kebu, since his humble beginnings. I remember being introduced to him and his music around the time of his debut album “To Jupiter and Back” and I was quite taken by it. He had his tentacles in ambient and experimental soundscapes as much as melodic pieces, closer to space synth. It was like a fusion of Tangerine Dream (their more accessible side) and Laserdance in an ocean of vintage analogue synthesizers. “Urban Dreams” is the third studio album from Kebu and it conveys grandeur and emotion all through its 20 (!) tracks and 75 minutes.

Now residing at a big label, ZYX Records, I think things may start to really happen for Kebu as this new album shows the unmistakable talent and technical skill he possesses. “Urban Dreams” alternate atmospheric interims with six minute epics to form a soothing coherence. Using only analogue gear makes it even more soft and pleasing to the ear and I actually find myself thirsting for more, even after being swept away for over an hour. This should truly be enjoyed in its entirety from start to finish as it makes much more sense that way. There is an aura of the current synthwave craze in here too, especially in tracks like “Fleeting Lights” or “Late for the Meetin in the Maze”, where steady beats are introduced and images of a forgotten eighties action series flash through your mind. Purely instrumental, I understand this music is not for everyone, but I am mesmerized.

Kebu has done an exceptional job with “Urban Dreams”. The one thing I would like to hear from him in the future would be to exeriment with guest vocalists. It would give Sebastian an even greater chance to reach his potential audience. Something he truly and undeniably deserves.