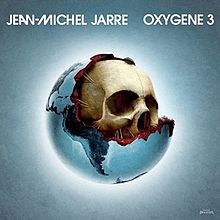 Mon Dieu. How should you react when heroes let you down? I do not have a good answer. Instead I will describe my feelings about an album, which in my head promised so much more than it delivered. Jean-Michel Jarre is a hero of mine; he has always been an integral part of my musical life as long as I can remember. He released his seminal album “Oxygene” in late 1976 and the conceptual follow-up “Oxygene 7-13” a little more than two decades later in 1997. Between then and now his fame and back catalogue has grown considerably, both in numbers and variation, and I have always enjoyed at least parts of every release.

It came as a surprise to me when he released information about the forthcoming album “Oxygene 3” rather close to his co-operative “Electronica” albums. I thought he had been fully occupied with those albums and his “Electronica” tour.

The first thing that struck me was the artwork, which is truly fantastic; a 3D rotated version of Michel Granger’s original artwork for “Oxygene”. The album consists of seven tracks, named “Oxygene 14” to “Oxygene 20”. My initial feeling after the first times listening through it was, where are the melodies? The one thing that Jean-Michel really excels at is the fine art of reducing complicated structures down to the bare essentials, yet keeping an emotional attachment to the melody, and then vary it slightly ad infinitum. I only find this on one track really. “Oxygene 17” is a kind of melody driven, quite strong song and the arpeggio in the middle is fantastic. Then at the end it goes to bits again, with some kind of free form groove melody, which sounds unfinished.

“Oxygene 14” feels like a 5 minute intro trying out different things, or to be brutally honest, it reminded me of the 10 minute soundcheck/tuning of the synthesiszers I witnessed in Copenhagen on the Oxygene 30th anniversary tour. Lots of bits and pieces and sound palettes, but no coherence, no structured song. Add some more familiar sounds, cut-offs, effects, CS80 space wind, percussion and looming strings and you get “Oxygene 15”. Then add drums (yes, drums on an “Oxygene” album) and you get “Oxygene 16”. But it is fragmented to me with familiar sounds but no you-can-bury-me-now-because-I-found-a-nirvana-melody.

“Oxygene 18” sounds like a rejected Enya instrumental. Enya is fantastic, don’t get me wrong, but this is over-simplistic, trying out the Absynth 3.0 atmospheric library, are we? “Oxygene 19” is quite nice, with a catchy melody and a nice bass line, but the arpeggios don’t change much during the 6 minutes, and this is what I miss; small intricate barely noticeable variations, which for me is the heart of the matter.

“Oxygene 20” is a grim lesson in noise; with bombastic detuned organ stabs followed by dripping arpeggios laced with EQ-ed samples of previous “Oxygene” tracks, complete with seabirds and CR-78 like percussion, more space wind, a sad string and an organ tris to bind it all together. But it is too late, I am already somewhere else.

The whole album lacks oxygen (pun intended). The sounds are fantastic, almost as a display of Jarre presets, but the lack of Jarresque melody, structure and build up is borderline annoying. Also, despite being quite minimalistic, I found the mix and mastering a bit cluttered here, quite strained on at times and on few occasions and not overly pleasant to listen to. I tried to listen to the album in a multitude of setups and locations, as I always do.

I have later read that Mr Jarre tried to have the same restrictions as for “Oxygene” back in 1976, hence recording it all in six weeks. I think “Oxygene 3″ deserved more. I love you, Jean-Michel, and always will, but I didn’t like this album. It is disappointing on the level of “Loveboat” with an Erasure scale. You can do so much more. Je suis désolé, two decent tracks on an “Oxygene” album doesn’t cut it for me, as Jimmy Cauty and Bill Drummond of the KLF would have it: “Burn the Bastards”. Oh wait you had some fire crackling noises at the very end of “Oxygene 20” didn’t you? I leave you with this positive note, you have shown that there is still potential in the “Oxygene“ concept, give it your fullest next time. I could wait until 2026 for “Oxygene 4”, if that’s what it takes.