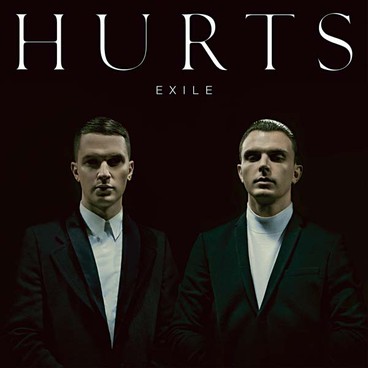 Hurts released their debut album “Happiness” in 2010 and it was a great success. 3 years of touring and writing new material later we are given “Exile”. I really liked their first album and needless to say my expectations were quite high. Once again the Manchester duo has collaborated with Gothenburg based Jonas Quant, both as co-writer and producer. The album consists of 12 songs and the subject matter of the lyrics mainly deals with relationships, but in a much darker tone than before. If the first album was about love, this one is about anger I feel.

After first listening to the album I wasn’t sure what to think. It appeared to be divided into 3 parts. The first 4 songs felt pretty commercial, border-lining boyband-ish – well produced but quite uninteresting. Then the middle part felt more rough, dark and harsh, and very nice – fantastic even. Then an almost bland finale where references like Coldplay and Robbie Williams stuck in my head. Not a good thing in my book, I’m afraid. Hoping that the album would grow on me I naturally continued to listen to it every day for a few weeks and I’m sorry to say that the first impressions linger on, apart from the last bit, which sort of grows on me.

“Exile” is very well produced and really requires something else than in-ear crap headphones to be appreciated in terms of sonic excellence. So, there are some comments I would like to convey. The album opener, title track “Exile” is quite promising with its raw bass and distorted drums, but it’s like it’s distorted just for the sake of distortion. In my world distortion is a wonderful tool which can lift various parts of a song and mind-meld it with the other parts. It works OK for this song.

Then we are stuck with 3 songs, which I don’t care much for – it’s too commercial for my taste. It sounds a bit like rejected leftovers from Pet Shop Boys’ “Elysium” sessions, topped with child choirs and slick production – uninspiring at best. When Theo proclaims, “Sing me to sleep” in “Sandman” I’m willing to do so and the line “Cut out my eyes” in “Blind” could have “eyes” replaced by “ears” if you are a bit nasty and grumpy.

Then something happens in the fifth song “Only You”. It has a fantastic bass and nice chorus, and it feels more electronic and rough. It is followed by the highlight of the album for me: “The Road”. It starts out as a mellow slow finely tuned ballad and then you’re hit with a sledgehammer of a bass, accompanied a virtual barrage of sounds which would have made Trent Reznor smile (I first wrote crap his pants, but changed my mind…). There is enough of electronic quirky sounds and angst to fill an oil tanker.

“Cupid” follows in the same style and “Mercy” is a wonderful tune. By the way, Pink Floyd called, they want their choir back. “Mercy” is also the transition song into the last part of the album, which to me is pompous and a bit slow, stadium pop almost. “The Crow” is number 9 on the album and starts like a slow newer Depeche Mode song merged with a Morten Harket song melody style. In the middle of the song you almost feel that Chris Isaak is standing outside the studio wanting to re-record his chorus for “Wicked Game”.  It is very beautiful, full of various small ambience-enhancing parts.

“Somebody to Die for” is the “U2 track” of the album, combining an Edge-like guitar with Lowe/Tennant string arrangements. The penultimate track “The Rope” builds into something that (almost) could work on a stadium tour. Last song “Help” concludes the stadium feel with arrangements and choirs worthy of Trevor Horn and Anne Dudley.

All in all “Exile” is a good album. To make it a great one, I would have scrapped the first four songs, redone the title track and released it as a 9 song album.