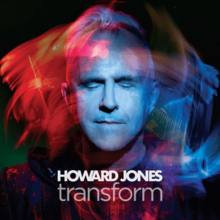 After going back to synthesizers on ”Revolution of the Heart” in 2005, Howard Jones inexplicably went on to do a quite dull conventional pop / rock album: ”Ordinary Heroes” in 2009. Then he did an interesting concept album called ”Engage”, which was electronic but mostly instrumental. So ”Transform” is a his first ”proper” album in ten years, and a pure electronic one at that. Thus, I’m rather excited. Plus, he’s worked with US electronica / dance artist BT on three songs, further sprucing up the modern sound of ”Transform”.

The first three songs released from the album are ”Hero in Your Eyes”, ”Beating Mr Neg” and ”The One to Love”, all showcasinh a splendid return to supremely blippy synthpop. It’s strong single material, and among the best stuff Howard’s ever recorded. Unfortunately the album itself has some lowpoints and ”Take Us Higher” is a track I can’t stand. Overall though, this really is a return to form. The first few times I listened to it I didn’t rate the album tracks at all, but they’ve grown on me (except for ”Take Us Higher” then).

Also featured on ”Transform” is the song ”Eagle Will Fly Again” from the movie about the long ski jumper Eddie the Eagle. The song came out in 2016 and that was actually the first sign that Howard was up to something good. It’s a great little synthpop ditty.

The slower songs like ”At The Speed of Love” (featuring BT) and ”Mother” are quite beautiful, but I miss the epicness of tracks like ”Another Chance” from ”Revolution of the Heart”.

The album closes out in dancey electro funk style in ”Stay with Me”, and even though it’s not a perfect album I’m pretty happy with it. Let’s just hope it doesn’t take as long next time.