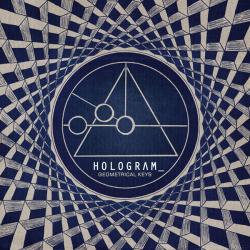 When you hear footsteps walking along a corridor surrounded by static noise, you know you’re in for something quite different. The first moment of “Fall into the Maze” (as described above) had me hooked. So let me go on to tell you why Hologram_ is the real deal…

First of all, this French sound artist, Martin Delisle, loves noise – lots of it. There is static, overdrive, all manner of distortion – it is as if you are listening to an old ZX Spectrum computer being possessed by Linda Blair’s Exorcist at times. Take for example “Origamia” – and imagine yourself locked inside a circuit board, and the circuit board really, really isn’t happy with you being there – I think you know where I’m coming from here.

The noise on display here isn’t disguising a lack of musicianship though, there are some really fine piano pieces to be found too. Of course they are not pure piano pieces, as there are crackles, spits and drone noises layered all over the top, but even so, some accomplished sounds can be heard under the cracks and hisses. “The Ballet of Abstract Motion” is a beautiful point in case, and well worth a repeated listen.

The album has variety and depth, never resting on its laurels – and for me, it mostly pulls them off with aplomb – amazing really considering there are a whopping 16 tracks across the set. It is almost like the album suffers from split personalities, such is its flitting around from loud to quiet, sharp to flat, noise to calm – and you floating along in the middle of it all…

In fact, I love nearly all of the tracks, especially “Symmetric Lines”, “Holy Haunted Box” and “Origamia”, as I mentioned before. They manage to push all my musical buttons, and sometimes all at once. Tracks I’m not so keen on – well, only really one stands out – “Time to March of Riddle” – maybe I’m becoming jaded with spoken word intros, but by the time the beginning has finished and the repetitive keys kick in, I’ve already had enough.

Now for a bold statement – this may be in the running for my Album of the Year already, as I predict I won’t hear anything this good over the course of the next 7 months or so. OK, it’s a bit early for that, but definitely this is the album by which all my other reviews will be judged for the rest of the year!

Oh, and by the way, the underscore at the end of his name matters, so as not to be confused with another artist of the same name.