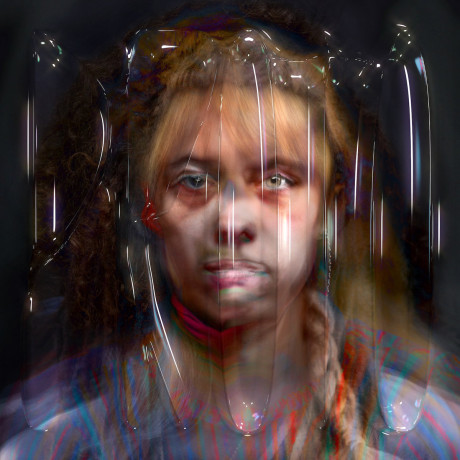 Holly Herndon. The name may not be so familiar to some of you, but for those who are aware of her, you will know that this, her third album, is bound to bring up some interesting surprises. Herndon is noteworthy composer as well as sound artist and “Proto” promises to be a feat of science as much as a feast for the ears. I first heard her play at Sonar Festival, and was instantly impressed at how different she was – even at a festival designed to push forward the boundaries of electronic music.

The album was recorded using A.I. as much as traditional music methods, creating an altogether new form of making tracks. There are actual songs here like “Alienation”, but the backing and sometimes the singing itself goes off in directions and styles probably never heard before.

The album shows an interaction between human and machine (Herndon collaborates with “Spawn”, her own A.I. program, for much of the album), which isn’t the cold, machine-like experience many think of. The idea is to show the warmth of the interraction, the humanizing of the machine if you like.

As for the music – there are some genuinely interesting tracks here. I found both the training track “Canaan (Live Training)”, and even more so “Evening Shades (Live Training)” fascinating; while there is no doubt that “Eternal” is a beautiful track too, with gorgeous folk-like singing developed into deconstructed blasts of sound.

There is something other-worldly about “Crawler”, where electro winds blow around the voices of sometimes human, sometimes robotic singing machines. The intertwining of the voices and sounds making for a slightly unnerving experience. “Fear, Uncertainty, Doubt” is an incredible track in this way too. It actually seems that Herndon’s voice is frozen into shards of crystalline glass as soon as it leaves her mouth. These shards are then played like a reverberating keyboard – it is simply stunning to hear.

If you’re worried that too many of these tracks seem like experiments, “Frontier” will show you that Herndon knows how to drop beats as well as the next techno head – in fact, it’s quite the banging track. “SWIM” also brings the bass and beats, though this almost moves into pop territory (well pop as created by Grimes or Bjork in any case). “Last Gasp” closes out the set, and is probably the most traditionally coherent track here. The vocals are full and upfront in the mix, with all manner of electronic trickery being subdued by a heavy pounding beat in the background – a very pleasing track.

The only thing I can say about this album is that it is a game-changer. It may not be for everybody, but it is a valuable a document of where we are in our relationship with computers at this point in time. File this along with Bjork, Aphex Twin and the rest of those innovators pushing electronic music ever further into the future.