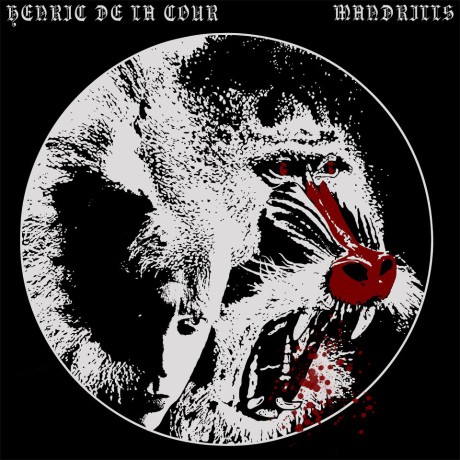 Henric de la Cour’s solo debut back in 2011 was the very opposite to the 2 previous Strip Music albums. Hearing his voice backed up with a streamlined, quantized instrumentation was an interesting contrast to the full scale arena suit that we’d gotten used to. This new concept, in all its minimalist glory, worked mainly because of this artist’s skill in writing very strong melodies. The debut was heavily promoted with “Dracula”, a catchy pop tune disguised in gothic imagery. The actual music, however, was far from as scary as the “Dracula” video clip insinuated.

So, what’s new this time around? A year ago we were given the first taste of the sequel, with the release of “Grenade”. A track that blew some M83 air into the before much stiffer packing. I get the impression that the producer and long time pal of the artist, Rikard Lindh, was allowed to experiment some more this time. The rest of the new full length is however not in the same vein as “Grenade”. The very essence of the desperate opener “Mandrill” is fundamentally close to Strip Music and songs like “Chasing Dark”, “Hank Psycho”, “Blackie Lawless” and “Rust of Rust” are perfectly balanced pop with a twist. Catchy tunes but still alternative enough to keep the mainstream rabble away.

This time the actual album release was promoted with another video release. The conceptual call/response duet “Shark” features Susanna Risberg, his live guitar player, on vocals. While “Grenade” hinted one direction, “Shark” along with the rest of the new album is more similar to the first one. Though the production has become denser the music still feels too clean, generally. The actual sounds are all right but they never gain any synergy in the final mix. The sonic impact is the sum of the parts – no more, no less. That’s a pity as there are a few tunes, just like on the debut, that seem aimed towards the electronic club scenes. If you want to make the gothic/electro dance floor move you need to squeeze more energy out of the songs.

Henric de la Cour is a natural talent when it comes to writing hooks and his melodic impact is not to be underestimated. His straightforward voice along with his well-balanced lyrics add a certain honesty to the songs. While there are a couple of tracks that I feel are a bit below the level of his actual potential the majority are definitely high quality tunes with a very central European shimmer all over. I do respect that he doesn’t want to go back to the bombastic anthems of Strip Music but I still feel that his solo tracks need some more ambience and real punch. And, let’s face it: if this was totally out of the question he wouldn’t have given us “Grenade”, would he? To make sure that Henric and the rest of the studio crew won’t limit themselves too much next time I’d suggest a future production crew based on de la Cour himself, Rikard Lindh and… Dave Ogilvie.