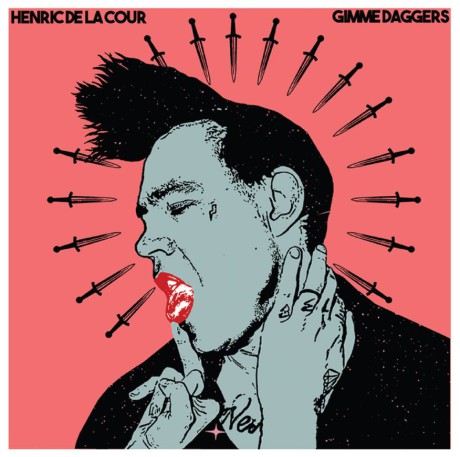 In many ways, Henric de la Cour’s solo debut from 2011 was a counter-reaction to what he had done before. More into electronic minimalism rather than any indie posing or arena explosions. This paradigm followed suit on the successor “Mandrills” from 2013 and while it indeed presented a certain development, I personally felt it lacked a bit of punch. Enter “Gimme Daggers” – HdlC 3.2.

The electronic base structure is intact but the puritan doctrine seems to have been lifted as de la Cour kicks off the album with “Slow Death Intro”. A tune that resonates well and reconnects to the artist’s relationship with The Cure’s “Disintegration”. This eighties goth romance is then elegantly phased into the first single, “Kowalski Was Here”, a much more modern track indicating that “Gimme Daggers” won’t be any retro trip.

This time the production feels much more confident, daring to incorporate elements from different eras of de la Cour’s long career and also push his electronica ambitions further. While individual tracks may stand out as genre-specific excursions there is always an element of coherence present. One can tell that both Henric de la Cour and the producer, longtime companion Rikard Lindh, have the experience to pull this off.

Lyric-wise this release is as self-disclosing as ever and while de la Cour has always been brutally honest in his writing, “Gimme Daggers” introduces quite foreign imagery compared to earlier albums: hints of optimism blended with the nihilistic undertones. The reason behind is, most likely, the fact that his cystic fibrosis diagnosis changed when a new cure (no pun intended) was discovered a few years back; lifting away the terminal aspects of the illness. This shift of reality, that obviously shook de la Cour’s existence, was well portrayed in Jacob Frössén’s 2014 documentary “Henric de la Cour”.

The new, less electro fixed sonic palette and the new somewhat positive twists to the lyrics give an overall expression of more depth and nuances; “Gimme Daggers” colours an image of the artist that many probably have considered black and white.