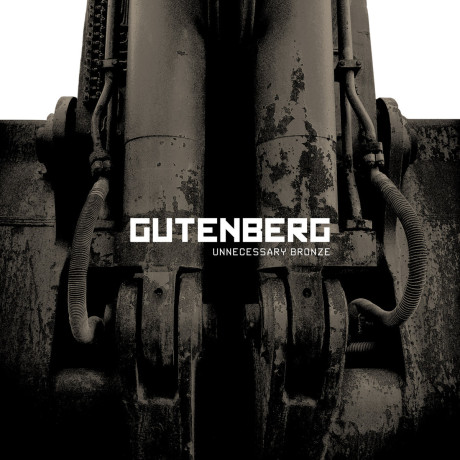 Gutenberg is Shouji Sakurai, a techno / industrial producer hailing from Aichi in Japan. Claiming to be a grandchild of the musique concrete style, this artist knows his way around a sonic palette.

The atmospherics of opener “Black Cloak Oracle” are incredible. It feels like the sounds are enveloping you, even entering you (especially if you are listening with a good pair of headphones). The sound is at turns claustrophobic, intense, yet intriguing.

Being that I am a sucker for those raw industrial sounds, parts of the album push all of my buttons. “Hydraulic Labor Force (Instrumental Version) is one of those. It has sharp industrial drones which are backed up by deep pounding beats, and a whole hell of a lot of noise as well. It only gets better when it rebuilds after breaking down towards the middle of the track. This one will be on repeat, as will “Sky Layer”, which blends together perfectly a slow build up into a pounding track of sonics, held together by an insistent hi-hat sound.

Of the others – “People, Singing Voice, Iron Pile” combines raw elements into a weird rhythmical track which draws you in and seduces you. “Inspired From Dje”, showcases a great glitchy track of weird clangs and thrown in snippets of sound; it felt like listening to somebody tuning in a radio while another person played a drum machine, but in perfect synch. I loved it. “Vested Rights & Interests” also had my foot tapping with its bassline hook.

Some of the less upfront tracks reveal little weaknesses. “Guy’s Kitchen” is good in parts, but too often it cuts out to something a little too fast to be ambient, but also not quite enough going on to be anything else, so stuck in a little sonic limbo. “Cape Style” I would say at 8.10 is also way too long for an atmospheric track where not that much really happens.

Overall, this is a clever producer who knows how to create complex yet still very listenable tracks out of a kitchen sink’s worth of equipment and field recordings. At turns loud and abrasive, and delicate and intricate, this artist is adept at what he does. If anything I wish there had been more of the loud abrasive tracks, and maybe the other tracks could have been for a different album, as when this artist lets fly, it’s really something to behold.