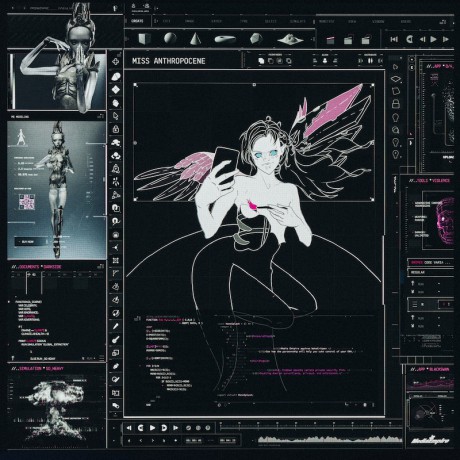 It seems like it’s been a while since I last checked in with Grimes. After the last review “Art Angels”, in which I predicted it would be the one that turned her into a bona fide pop star, lo and behold, it happened, and then some. Not only did she gain success, she ended up collaborating with Janelle Monáe, supporting Lana Del Rey and then Florence and the Machine on tour and hooking up with a certain Elon Musk.

It seems that this has created a little backlash for Ms Boucher, and one that she has taken to heart, by including it in her creative psyche – that of being perceived as the villain. So we have the background to her new album, but with the Joker (amongst others) as inspiration and the album rumoured to be a concept album on the theme of gods and climate change – the title hinting at a character embodying this terrifying trait.

From the start of the first bars of “So Heavy I Fell Through the Earth (Art Mix)”, we don’t need to worry about the way this album is going to go. This is the Grimes we know and love – ethereal voice over vaguely futuristic keys and swirls; it’s like five years haven’t passed. Interestingly, the range of music covered is ever wider, bringing Grimes most wide-ranging album she has ever done. It covers everything from acoustic guitar to fully-effected ethereal; drum n’ bass to nu-metal – it’s all here.

“Darkseid” is as the title states, a darker take on the Grimes sound. Aided by PAN, this bassier, blacker number bleeds across your ears, while the voice of PAN scurries in and out of your head, autotuning all the way. It’s not an easy listen, but there is something there that keeps you involved. The biggest shock is the change from the apocalyptic vision presented towards the end of this song, and the strumming of an acoustic guitar – the change is almost violent, and takes a few seconds to get used to. “Delete Forever” is nice – but on listening to the lyrics, the pain is still there.

“Violence” returns to the themes of previous tracks, and is probably the strongest track of the set. It pounds and probes your ears, while Grimes angelic voice rises above it all. ”4ÆM” takes the baton and runs with it, providing a slightly more drum’n'bass tinged rave track, which is affecting enough, but seems a bit retro for somebody so forward thinking. Having said that, it’s a body-mover, so if it’s party Grimes your looking for, this is the track.

Again the tone slips right back down, with the mournful piano chords and effected voice of “New Gods” echoing across the sonic plane – the echo effects put into overtime. “My Name Is Dark (Art Mix)” starts to pull the tempo up again, and the screams and effects create a more thematic presence again – a nice effort. “Idoru (Art Mix)” follows the reasonable “Before the Fever”, and is a great track covered in what sounds like an over insistent car horn. I would love to have heard what the original mixes were, as in this case I think I would have preferred the track pre-tinkering.

Do I like the album? I love Grimes, I love her creativity, but this album – not sure. It feels too choppy, too jarring in its transitions – there are some good songs but it feels like a group of tracks thrown together rather than a coherent album. As tracks most are great, but listen to this album on shuffle, it’s the same effect.