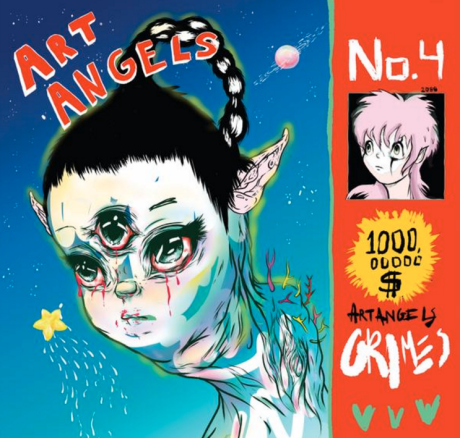 It was a rainy, dull and cloudy day the first time I saw Grimes live in concert. She was on stage late afternoon at Field Day festival in London. I remember a very sparse stage – a dancer semi raving, semi-punk rock pogoing in front of a couple of synthesisers, with a tiny figure playing them. I remember thinking to myself two things – first, that she was destined for big things (the tent was absolutely packed by the mid-point of her set), and that she had the most angelic voice I had ever heard live.

Fitting then that Claire Boucher, aka Grimes, has named her fourth release “Art Angels”. But has the voice that encircled the outsiders finally made a dive for the commercial underbelly?

There are some great titles – the opener “Laughing and Not Being Normal”, for one. “Kill V. Maim” another. The former is an interesting track, and quite mature in structure – still experimental, but playing with ideas of orchestra and even opera, if you take into account Grimes’ vocal. The latter is almost cheerleader chant turned psychotic – it is catchy as hell, and probably bites too.

The majority of the tracks seem to show a more focused Grimes in operation – keeping the will to experiment, but not anywhere near as whispy as previously. Floaty tracks have been replaced by beat-led almost dance tracks. “California”, a good example, moves into a slightly more mainstream direction – but more kind of standing around the doorway smoking than gatecrashing the pop party.

Tracks I enjoyed the most – I liked “Flesh Without Blood”, it was quite mainstream by Grimes standard, but the soaring vocals that penetrate the track keep it from sailing too close to the commercial. I really liked “World Princess part II”, which had elements of the soaring vocals I remember from previous long player efforts. I loved “SCREAM”, featuring the rather wonderful Aristophanes – a real party track with actual screams as a chorus. Also “”Venus Fly”, which features the amazing Janelle Monae, creating probably the best track of the whole set.

Tracks that I didn’t enjoy – not many in fact, though the title track did skate too close to pop water for me, as did “Butterfly” – not that being commercial is a bad thing, but these were those types of saccharine-sweet efforts that hurt my teeth…

Undeniably talented, and getting more and more that way with each passing album, Grimes could be leaving that category known as underground artist, and be heading on the way to pop sensation very, very soon. Don’t worry though, there aren’t too many acts like Grimes out there. And she’ll never truly lose that weirdness, or complete creativity, that makes her so compelling.