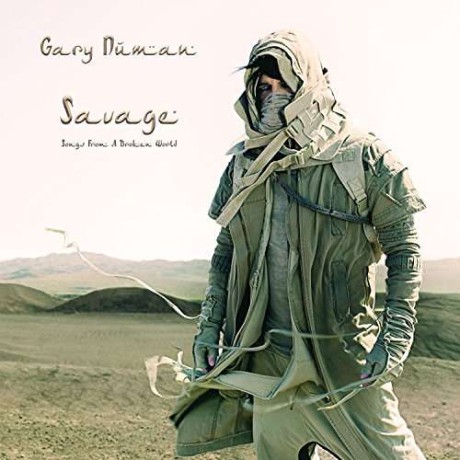 Savage (Songs from a Broken World)

Gary Numan returns to the scene with a new album, and a new concept. ”Ghost Nation” is an appropriate opening for the album, as it seems to set the scene, creating a narrative of a post-apocalyptic landscape, where global warming has resulted in widespread desertification, and a blending of Western and Eastern cultures. Don’t panic though, the famous Numan synths come crashing in on the chorus of the next track, “Bed of Thorns”.

This is the 21st studio album made by Numan, and the craftsmanship is there for all to see. Gary knows how to bust out a synthpop tune when needed, take the first single “My Name Is Ruin” for example, which is quite a catchy little beast, and possibly one of his finest tracks in years. “And It All Began with You” is also worthy of mention – it is very atmospheric, slow and searching, in fact the rhythm doesn’t enter the track until well into the second half of the song. The marching of an army of some description marks the introduction to “Pray for the Pain You Serve”, another dynamic track of pounding beats and euphoric choruses.

These days the synths are played a little lower down the scales, and the effects are dirtied up to create something of a dark electro feel, something of which acts like Nine Inch Nails have tipped their hats towards. Listen to a track like “What God Intended”. It is like a condensed history of what Numan is all about in one song. I loved the theatre of the track, and the scale – more than any other this track sounded epic. “Broken” marks the end of the album, and is made up of distinct Eastern-sounding synth lines. The track is sorrowful, yet beautiful; powerful and insistent, and again possibly another track to include in Numan’s all-time greats.

So, is it one of his best? Unfortunately I have to say no, as his early career set a bench mark so high that it would have to be an album of gargantuan proportions to even come close. That being said, there are some amazing tracks on here, and some of his finest moments of recent times. Fans will love it, others will appreciate it, and other musicians will continue to cite him as an influence – so more or less as it should be.