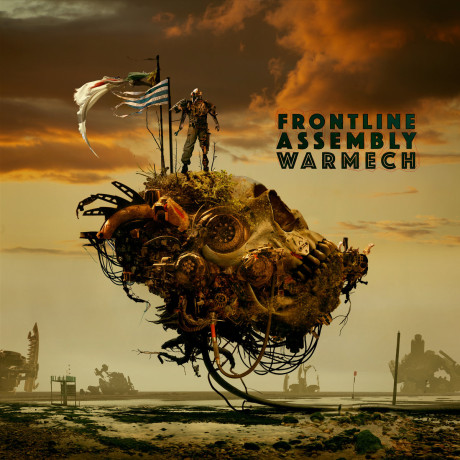 This is the last album Jeremy Inkel worked on before he passed away in January 2018. Luckily it’s a beautiful send off. The talented Jeremy got involved with Front Line Assembly way back in 2005 when he worked on ”Artificial Soldier”. I met him a couple of times, and he seemed like a good dude, bringing youth and freshness to the FLA sound. He left way too soon.

”Warmech” is a video game soundtrack for the game by the same name and the music has been waiting for the game to reach completion. It’s also perhaps the most ”Inkel-y” album released under the FLA moniker, with a very modern vibe to it.

In addition to Jeremy, the full lineup is Bill Leeb, Jared Slingerland, Sasha Keevil and Craig Johnsen so it’s really a team effort. Still cohesive, albeit not immediately recognizable as FLA since there are no vocals, and the music is not very ”industrial” so to speak, leaning more towards EDM and dubstep. Leeb has never been afraid of venturing into other genres, so it’s no big surprise really. If I’m not mistaken, many of the songs here started out as new Noise Unit tracks, before the guys got involved with doing the soundtrack.

If you compare this to their previous soundtrack for ”Airmech”, this one is a bit more upbeat and dancey, while still being very atmospheric. Some of the best tracks are the slower ones however, like the intensely beautiful ”twin” tracks ”The Imminent” and ”The Eminent”. The synthwave ending track ”The Creator” also fits in this category.

All in all, this is a nice way to tide us over until the next proper FLA album, which is being finished up as we speak. If you’re looking for warm, ethereal textures and groovy beats, look no further.