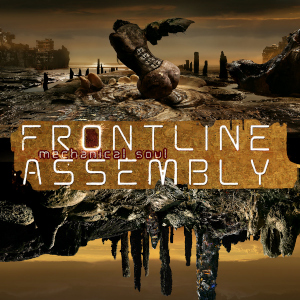 It’s been a few years now since Jeremy Inkel’s tragic and untimely passing and Front Line Assembly is once again the super duo Bill Leeb and Rhys Fulber. “Mechanical Soul” is quite obviously influenced by Rhys’ recent forays into dark techno. The songs are hard hitting, monotone and often built on percolating EBM bass lines. Bill’s vocal style – albeit enhanced with a lot of digital processing – is almost reminiscent of “Caustic Grip”. Trippy, hissing, demented Bill is back! The music could also be seen as a sort of throwback to the “Caustic Grip” era, with a harsher and more minimal sound. Another thing “Mechanical Soul” has in common with that album is that it takes a while to get to grips with.

The one thing missing though is the songs. As you can expect, the beats, bass lines and atmospherics are as always created to perfection, but there’s very little melody and next to nothing when it comes to rousing choruses – except on a few tracks – which made me disappointed when I first got the album. The band’s ability to blend hard industrial beats with amazing melodies set them apart and is sort of their superpower, so I was a bit sad to see they’ve been exposed to cryptonite. After numerous listens, I still have some mixed feelings about “Mechanical Soul”. I really appreciate the darker more experimental tone, but I can’t help but feel that a few of the songs would really shine if something more happened in them.

That being said, there are some absolute bangers on here too. First we got “Unknown”, a classic FLA track quite reminiscent of their old hit “Mindphaser”, with fast paced swirling synths and a great chorus that I played so loud in my car it almost bounced on the way to the supermarket. “Komm, stirbt mit mir” (Come, die with me…) is also top notch, where Bill’s German vocals and the monotony get some added flavour towards the end with dramatic pads and general shenanigans.

Then we can hear Jean-Luc De Meyer from Front 242 taking the mic on “Barbarians”, a more mellow sequel – or remake – to “Future Fail” from “Artificial Soldier” with the same vocals but with a more epic backdrop, where the melodic FLA is back in full force. Dino Cazares from Fear Factory adds some guitars to “Stifle”, which complements the menacing, rather slow track well, but again there’s a feeling there could have been more. The first half of the oddly named “Rubber Tube Gag” is dissonant bleeps on top of a static beat, but towards the end it turns into something quite palatable.

“Mechanical Soul” is still growing on me for each listen. Small details, sounds, pads, intricacies and rhythmic details appear, but I still miss the melodies. I can however recognize it’s a beautiful and cool album where FLA steps into the next phase of their existence.