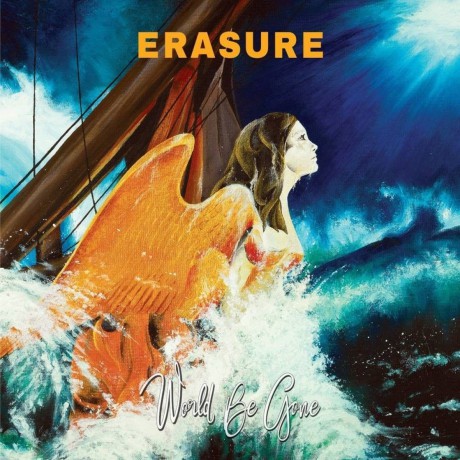 The 17th studio album from Erasure is entitled “World Be Gone” and it is an appropriate title. For the first time we do get an entire album from Andy Bell and Vince Clarke contemplating the political climate of today and the how it affects the world around us and our behavior.

The picture of the world they paint is a bleak ugly one, where no one really cares about anything or anyone. It is more about stating that the world has changed than actual solutions. It gives the listener little hope, unless we start all over again. Erase and rewind. And maybe they are onto something. What can we do when the news reports are so nasty that we simply switch channel – not dealing with the issues. It might hurt to say goodbye, but it is all for the greater good, so lets do it. It also reflected in the artwork, where the ship’s figurehead breaks through the stormy sea to find new direction.

It is not the first time Erasure deals with general thoughts on the world around us, but this time it feels more on a global scale and more thematic compared to “She Won’t Be Home” on “Crackers International” for instance, where family matters are central instead. This is also reflected in the sound of the Clarke-rian machinery. The album feels somber and predominantly in minor keys, which I find beautiful. It is pop muisc made with synthesizers as Vince is telling us. There is also a new quirkiness to some of the sounds and melodies – lovely. There are many more or less hidden small melodies, arpeggios and filters and what not. Also the percussion feels more elaborate than previously. The new album is also about love and finding the spark again, like in “Sweet Summer Loving”. My impression is that the lyrics have a bit more depth this time; no fishes in the sea that have gone to sleep.

One thing I really, really love about the new album is the choirs; it feels like they put a lot effort in the vocal arrangements throughout the album and Andy’s choir on “Be Careful What You Wish For” send chills down my spine. And I do like the standing-on-the-barricades-shouting type of vocals in “Still It’s Not over” and “Oh What a World”. In “Take Me out of Myself” the alternative song melody in the verse is either interfering with the main lyrics too much or could replace the dominant one; I like the melody of the alternative better I think.

“World Be Gone” is a self-produced album and it sounds great. On some tracks the vocals seems a bit muffled though, or not really muffled, it is almost as Andy had a bit of lisp. I don’t know if it is from the post-production or the recordings themselves. The effect varies quite a bit so I don’t believe it is Andy himself. The second thing I like to comment production wise is the last track “Just a Little Love”, which for me is a missed opportunity. I think it is a truly fantastic track, a new “A Little Respect” sort of, hidden behind a quite a mundane production where the transition from verse to chorus is mind-numbingly dull. Just listen to the simple yet fantastic transition in the title track “World Be Gone” for comparison. Also the vocals’ volume annoyingly varies quite significantly.

I don’t know if it is intentional but during the backing choirs of “A Bitter Parting”, I had to look in the liner notes expecting to find Enya credited and Trevor Horn is probably smiling in recognition of the Buggles-chord-stabs in “Just a Little Love”. And the Rhodes-organ in “Take Me out of Myself” made my complexion a little whiter shade of pale. The very beginning of “A Bitter Parting” made me think of their own track “Alien”.

For me the album lacks a shining star track, but there a few very good ones. “World Be Gone”, despite the weird hi-hats, “Still It’s Not over”, the un-Erasure-esque “Oh What a World”, that lost opportunity “Just a Little Love” and the first single “Love You to the Sky” stand out for me, and there are I couple skip-tracks. It is a solid album. The first time I listened to it I was a bit disappointed, not now, and after 25+ listens it still grows on me, maybe it will be a new “I Say I Say I Say” even, just like Vince said.

Oh yes, I have one request as well. When the special guest for the Robbie Williams tour nonsense is over and Erasure embark on their own tour I would like to have “Oh What a World” as the intro, merging into “Fingers & Thumbs”, pretty please.