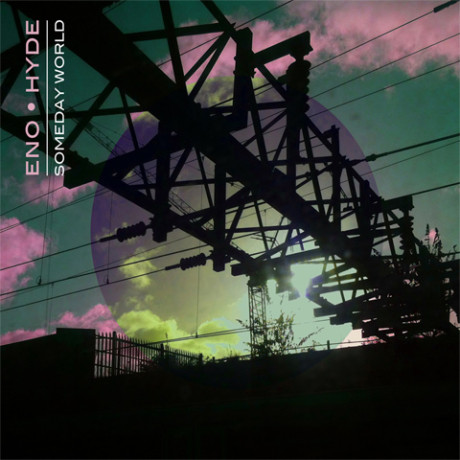 You rarely get supergroups in electronic music. This seems to be more the domain of rock and all of those ego-types of music. So it comes as something of a surprise, and also makes you salivate at the thought of the legendary Brian Eno teaming up with Karl Hyde of Underworld fame. If ever there was an electronic power duo, this is it. Not to mention this album appearing on the also legendary Warp Records (now surely I don’t need to tell you about them). High expectations then.

“Satellites”, the opener is a bit naff. Sorry, but the keys seem reminiscent of old Yamaha keyboards on Toy Trumpet mode – not really what I would expect from 2 grandmasters. Unfortunately this seems to set a trend throughout the album – some interesting little numbers, some really good tracks like “Witness”, which is full of joy and groove, and some pretty shoddy efforts. “Mother of a Dog”, with its many high pitched sounds nearly made me want to rip off my headphones for a bit of relief. As for “When I Built This World”, well I’ll politely just draw a line under that one.

There are a number of collaborators across the album too – including members of Coldplay and even Eno’s old band, Roxy Music. At some times, this amount of talent brings harmony and balance, but at others it feels like 2 many cooks are in this musical kitchen.

“Who Rings the Bell” is this duo at their best. Lovely layering of sounds, clear spiky vocals from Hyde, laid-back techno stylings from Eno… this is almost like listening to Underworld if you were asleep and dreaming about songs they hadn’t recorded – the slowed-down, dream-like tracks having life, but not to the point of making you want to jump up and pump your hands in the air. “Man Wakes up” is my personal favourite as it seems to fit alongside the quirkiness often associated in the past with the Warp label, though it is also highly musical rather than abstract and experimental. It somehow reminded me of a Paul Simon “Graceland” era kind of track – which I wouldn’t necessarily expect from these 2 artists. “Strip It Down” would make a great live track, where they ever to play live (imagine that!). For me, this should have started the album off.

It’s a bit of a musical sweet shop approach, taking bits and pieces from everywhere, and seems to trade a lot on their names – I wonder if this album would have made the light of day had it been from an as yet undiscovered hopeful. With a little bit of careful pruning, this could have made a delightful mini-album, but an interesting project nonetheless, and it just manages to stay the right side of over-the-top.