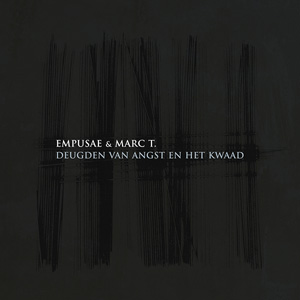 So, what do we have here? Well, it is a release from two seperate electronic artists, who have combined to create a collaborative musical effort. Empusae is actually Sal-ocin, who usually works under the aforementioned moniker, while Marc T. May be better known to some as the IDM act Dither, along with his work with the sludge postrock band Dirge. This album comes off the back of working together on Empusae’s 2013 album “Sphere from the Woods”, and continues with the guitar-and-electronic soundscapes developed for that.

The first track is long and sticky; it feels clammy to your ears as you plod through a post apocalyptic world of drums and guitar – repetitive, long, though very atmospheric nonetheless. This is a pattern that seems to follow through the course of the album, with tracks hitting 7+ minutes in length being not that uncommon.

“Basalt” is crunchingly slow metal, which lifts around halfway through thanks to the slow rhythm of a live drum kit, and a snare towards the end. Everything slowly builds and builds, and then fades away again, and you’re left with the feeling that it could have just pushed a little bit more. “Onzinnig Bestaan van Vergetelheid” has to be the most successful blend of gloom and atmosphere for me, as there is a nice balance across the sound range of deep sonics, mid-range drums and the ocassional pulse tone at the high end, which makes everything that much more satisfying.

The highlight of the album has to be the atmospheres created in the tracks, as I mentioned before you don’t just hear them, you can feel them. Unfortunately, sometimes the tracks just seem to be too repetitive for me, maybe to do with the excessive length of the tracks at times. Some good ideas, but too stretched out for me.