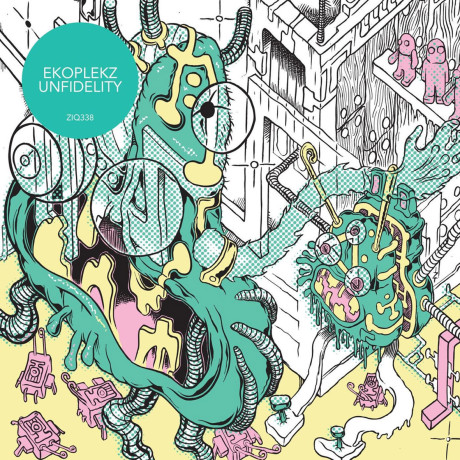 I always like listening to debuts. There is something about the energy that can be heard in them that is hard to define – they demand to be heard. So listening to Ekoplekz, a new signing to the ever-expanding Planet Mu label, should be worth a listen. I hope I’m not getting my hopes up too high though.

Ekoplekz, otherwise known as Nick Edwards from Bristol, with the help of label head honcho, Mike Paradinas, has created an album of “live” electronic music. I say “live” as very much against the grain of what is happening these days, the tracks on this album are made using analogue instruments, live recording techniques, as well as embracing other more experimental approaches such as improvisation – all things that sit well with this reviewer I have to say.

To the music then… It has to be said that the tracks occupy the lower frequencies of the sonic spectrum quite commonly, giving the music a womb-like, mesmorising quality – trancey, but not trance, if you see what I mean. There is a warmth from the electronics too, I have to say this is down to the real instruments, and it is all the more welcome for this.

“Robert Rental” is my first track of note, as it has a drone-like air of menace about it, which constantly builds and distorts. The danger with this type of experimental track is it can be left to build too long, often becoming 7-minute plus recordings which loses their initial power. I believe I’m right in thinking that the genius of Mr. Paradinas was the guiding force in keeping the track lengths here down, and so therefore keeping them vital – as this one certainly is at just over 3 minutes in length. “Tuning out” is the first to get some drum beats flowing alongside the atmospherics, and they make it my favourite of the set – very sophisticated – more like this would have been great!

The easy comparison to make is that of dub, when listening to tracks such as “Severn Beach”, but I am more inclined to think of old 70:s sci-fi programmes, also educational programmes from that era, and even early Boards of Canada, as much as the likes of King Tubby or On-U-Sound… even “Blade Runner” springs to mind in the case of “Sea 90”. Unfortunately the weak track for me is the title track, as it doesn’t seem to really do anything, and maybe its placement on the album (after the far superior aforementioned “Sea 90”) makes it appear all the more weaker.

Critics could say that the tracks are very similar, but I would say that this is a competent Planet Mu debut from a man who obviously loves his music, and who benefits from having Musiq in his corner. An album I could easily put on, leave on repeat and dip in and out of.