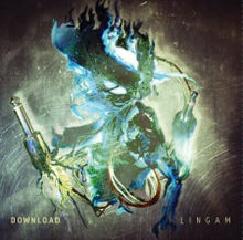 “LingAM“, the title track gives an exact idea of what Download is all about. It has some old-school break beat tricks to it, yet is more than loaded with all sorts of electronic over-dubs – nice and upbeat, with a strange side to it… ”Duppy” is a good, almost Aphex Twin-like acid track and I quite liked it, if truth be told. “Yoni” I liked more – mainly because of the vocal snippet intro, which introduced an almost old-school racing car game soundtrack, for a game that didn’t exist (but should have-circa 1992).

For the rest – the tracks are solid, largely through building around percussion, a characteristic of Download’s style, though nothing really that spectacular. By the time you hit the last track “PiLLAR”, it all seems peter out, rather than invite you to rewind and start again.

The album’s experimental, yes, but you would be hard-pushed to fit it into the company of those artists who are waaay out there (Autechre comes to mind). There is too much in terms of, dare I say, up-tempo techno beats for it to really appeal to the arty crowds. I could compare it to the likes of DMX Krew, or some of the early 808 State stuff, to give you an idea of how it might sound to your ears.

It rocks in all the right places, but may be a little too retro for some. Not being satisfying enough for the arty crowds either leaves it in a dangerous no-man’s land. Still, it is more enjoyable than you may think.