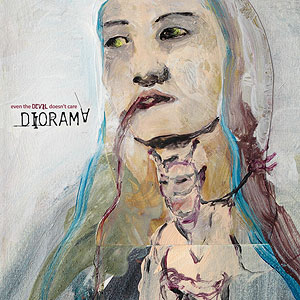 Even the Devil Doesn't Care

It is pretty impressive to see the perseverance and stamina of many artists in the undeground electronic music field. Very few of them reach any form of commercial success, yet they keep pouring their hearts and souls into what they love most. Kudos to all of them.

Torben Wendt is one of those who seemingly does it with ease without compromising an inch. He is accompanied in Diorama by (vocally similar) Felix Marc, who might be mostly associated with the club friendly futurepop of Frozen Plasma these days, but Diorama packs a different punch altogether. A gothic aura and a sound closer to darkwave than anything else are paired with Wendt’s vibrating vocals to form something very dramatic.

“Even the Devil Doesn’t Care” has some of his best tracks to date, the relentless “Hope” being the most powerful. It’s a dark cocktail that is best served in shot glasses as the constant gloom of it can be a bit much to swallow all at once. Guitar stabs, potent drum beats and moody synths do make up an intriguing soundscape though, and all 12 songs on the album have their appeal. Ballads and midtempo pieces dominate the track list and suits the compositions well.

Diorama will hopefully continue their dark quest for years to come, as their approach represent a side of electronic music not often brought to the forefront. “Even the Devil Doesn’t Care” deserves to, and hopefully will, be heard by many.