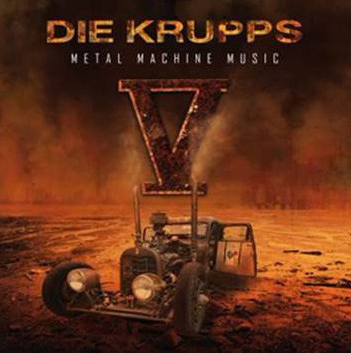 Compared to their 2013 album, “The Machinists of Joy”, the new effort from old-time Release favourites Die Krupps, ”V – Metal Machine Music”, is harsher, grittier and loaded with thrash riffs. This is probably, in part, due to the reemergence of Volker Borchert on drums, and the never tiring riff-bashing Marcel Zürcher on the guitar, taking a more prominent role in the band than previously. But the electronic parts of the album feel harder and grittier as well.

The themes on “V – Metal Machine Music” are entwined with recent events, terrorism, politics and plain madness, which have made an impact on masterminds Jürgen Engler and Ralf Dörper. Examples of this are the songs “Battle Extreme”, “Kaos Reigns”, “Bonded by Blood” and “Road Rage Warrior”, the latter being a homage to Mad Max (also influencing the artwork).

Engler says it was clear in his mind that he wanted to make a much harder album than the previous one, and they have succeeded. I prefer Die Krupps when they let the machines sound more than the guitars, but that is my personal taste, I do like the harder electronic parts here very much though. I recon that the fans of Die Krupps are slightly divided into the old EBM fans and their electro metal and Neue Deutsche Härte fans, and for the latter the album must feel like a return to the right path.

There are also a few reworked tracks dating back as far as 1985. For instance “The Vampire Strikes Back”, from the late nineties, and a pretty much totally slaughtered version of the classic “Volle Kraft Voraus” ending the album. But “V – Metal Machine Music” has its merits; it is a nice collection of tracks, the album is pretty decently produced, however, at times it’s too loud and overcompressed for my liking but here and there also dynamic.

For me “V – Metal Machine Music” is a natural continuation of “III – Odyssey of the Mind”, albeit 20 years later. My favorite tracks are “The Truth”, “The Vampire Strikes Back” (not only for the Star Wars reference) and the old 1985 track “Alive in a Glass Cage”. It is a deliberate step towards a harder metal sound and perhaps what Die Krupps needs to regain a larger following.