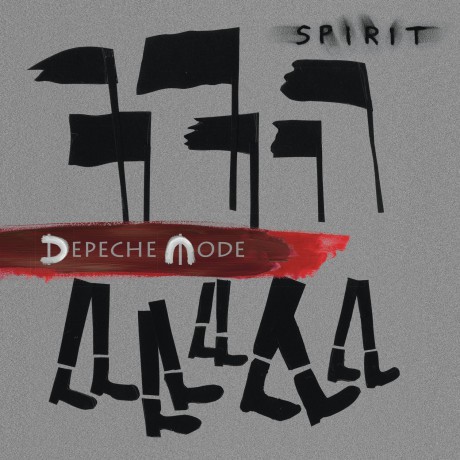 “Spirit”, the 14th studio album from Depeche Mode consists of a dozen tracks produced by Depeche Mode and James Ford in Santa Barbara and New York. Preceding the album was the single “Where’s the Revolution”, which for me was a bit of a let down melody-wise. It was also the first single release where my anticipation was low, but there was something in the production that was different compared to the previous Ben Hillier trilogy of albums. It sparked my interest and I could hardly wait for the promo.

One minute into the first track “Going Backwards” I felt that this could be something good. It felt like a perfect intro song, and not surprisingly it kicked off the release gig in Berlin. A strong opening track with a nice slightly distorted vocal effect, but what was really apparent was the shift in percussive programming compared to the previous albums. And this goes for the entire album: the percussive parts, along with hammering basslines and panning arpeggios, are allowed to be a much more dominant part of the songs, driving them forward.

The second track is first single “Where’s the Revolution” followed by the slow and mellow “The Worst Crime”, a grim tale of a hanging. For me it is rare to get really emotionally affected by music nowadays but when Dave almost screams “Pull the triggah!” in next song “Scum” I got goose bumps. The last time that happened for me with Depeche Mode was when I heard “Precious”. It is strange how a single lyric line accompanied by haunting strings can set and change the entire mood for a song. Again the distortion effect on the vocals is really fitting and adds to the eeriness of the track. It is also the first track of a few with a hard stop.

The dark lyrics deal with murder, death, dishonesty, societal degradation, corporate exploitation, relationship difficulties – and politics. The lyrics range from brilliant to quite juvenile, like in the last track “Fail” but there it is probably deliberate considering Martin Gore is such a prolific lyricist.

Next up is “You Move”, which is a rare track in that Gore and Gahan share writing credits. I like how the song is programmed – the bassline and percussion along with simple yet effective lead melody brings it all together, and the verse has a strong feel albeit is a bit repetitive. The entire album feels more thoroughly programmed than on the last few albums. Most sounds have a purpose and help set the mood. Like in the sixth track, the slow dreamy “Cover Me” written by Gahan, Gordeno and Eigner. Complete with some sort of airy processed pedal steel guitar and arpeggio bassline it could possibly be the best track written by the trio. There are no interludes on the album but the closest thing is the fantastic ending of “Cover Me”.

Martin Gore has to have lead vocal duties on a Depeche Mode album and “Eternal” is the first of two tracks where the nowadays trademark vibrato comes into play. It is a slow very dark haunting hymn of love, probably a sacral lullaby for his kids promising eternal love no matter what.

Next up is “Poison Heart” from the Gahan/Gordeno/Eigner camp. A mid-tempo reflection on the realization of that someone close is not what what they seemed to be, exploding in the chorus with lots of crazy distorted sounds and those haunting strings again. It has a familiar Gore-ish wailing backing vocal, a finger-picking harsh guitar, a bass guitar and an almost Rhodes-like organ. For some reason it reminded me of “Twin Peaks”.

Track nine is the uptempo “So Much Love” with a hammering bassline throughout, building up to the chorus and the sound is really elaborate with lots of small melodic parts, strings and what not, all done with finesse.  The bass drop is very nice; I fear our Austrian drummer friend will crush it to smithereens on stage though.

Track ten is “Poorman” with an intro reminding me of a song in the Swedish movie “Ronia the Robber’s Daughter”, but that feeling quickly disappeared with the simplistic lyrics about corporations taking advantage of the little man, again not the best lyrics from Gore, but it might be done tongue in cheek. It sort of ruins what is an interesting song in musical terms for me.

The penultimate track “No More (This Is the Last Time)” is written by Gahan and Kurt Uenala from Soulsavers. It is a nice mid-tempo pop song, again with a hammering bass and dreamy glittering melodies. The album then ends with “Fail”, my least favourite and a slow growing Gore ballad where he complains about the humanity and how bad everything has become in quite a dreary way.

What I lack the most on the album is a mind-blowing melody of epic proportions; there are fragments of what could have been something greater. Also, sometimes both Dave and Martin get stuck in a way of singing I do not much care for, with lack of attack and they take the easy road, leaning towards their well tested formula (with notable exceptions of course).

So “Spirit” is not a new “Violator or “Black Celebration” and I wasn’t expecting that. I think both the band and me as a fan are in a different part in life. We have changed – what was will not come back and it does not make me sad. Although there a few nods to their heritage here and there. Depeche Mode have always been an integral part of my life and always will be and we don’t agree at times, just like in any relationship. With that being said, I think “Spirit” is a step in the right direction. The album is more coherent and the rediscovery of real dominant percussion interlaced with the basslines, arpeggios and melodies is the way to go. And the programming proficiency is more apparent, part accredited to the mastermind Matrixxman I believe. My favourite tracks are “Scum”, “Cover Me” and “So Much Love”. But most importantly, “Spirit” grows on me.