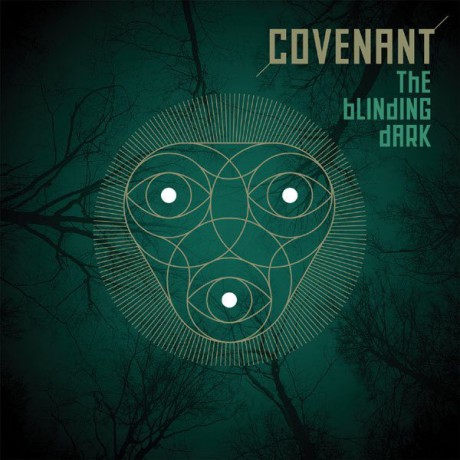 “Leaving Babylon” was a massive leap forward for Covenant as it followed what I felt was a consciously chosen pretentious path on “Modern Ruin”. Core duo Eskil Simonsson and Joakim Montelius should always be praised for their unbreakable will to find new ways of approaching the creative process, but on that particular album they lost me. Firmly aboard again now, “The Blinding Dark” still has a lot to prove.

Taking on all sorts of darkness, Covenant have gone quite minimalistic in their sound here, making their vibrant gloom grab you from every angle. The “Sound Mirrors” single is in no way representative of the claustrophobic sound and feel of “The Blinding Dark”, as it leans more towards their catchy club sound. Great in its own right, as is “I Close My Eyes” which should be considered as the next single. One of the top 10 tracks ever written by the band, if you ask me. Powerful and anthemic, to say the least!

Most of the track list, however, is more laidback, hypnotic even, and has a general aura of unease and dystopia. “Morning Star”, “Cold Reading” and the cover “A Rider on a White Horse” all have that and while they require their fair share of listening, they are all massive growers. Then there are pieces that build on both styles, such as “Dies Irae” where the darkness softens when the beautiful chorus kicks in. The unrelenting darkness returns in instrumental album closer “Summon Your Spirit” where all hope seems lost.

“The Blinding Dark” may be quite difficult to wrap your head around at first , but it shows Covenant as they are evolving. The different, yet cohesive, track list has one vital element of continuity and it spells quality. It may not be a hit album, but approach it with open eyes and ears and you will be rewarded.