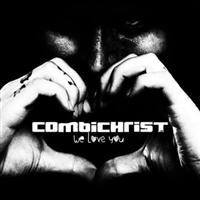 I enjoyed both “What the Fuck Is Wrong with You People” and “Today We Are All Demons” as they’ve got a certain groovy aggression that I seem to be partial to. Then I sort of lost faith around “Making Monsters” as I thought it didn’t do much for me. Anyway, now they’re back and they’re even telling us they love us! Have Andy LaPlegua gone soft? Nah, he’s just messing with us. “We Love You” is more of everything; more guitars, more aggression, harder beats. It’s even Combichristier than before! But does it result in a better album? Not necessarily.

There’s a metal industrial and punk vibe to the music now, with lots of chuga chuga guitars on top of furious beats and LaPlegua’s tortured vocals. I applaud him for trying new stuff even though it doesn’t really bring industrial metal forward. Not that every album needs to be groundbreaking of course. Lyrically it seems to be lots of teenage angsty stuff. To be fair, I didn’t receive any lyrics with my promo, and it’s very hard to discern the vocals most of the time. The song titles are clear enough however, and they run the entire spectrum of “cliché evil”. Case in point: “Every Day Is War”, “Satan’s Propaganda”, “Maggots at the Party” (catchy song though), “The Evil in Me”, “Fuck Unicorns”, “Love Is a Razorblade” (oh, come on…) etc.

Kudos goes to the aforementioned goth ballad “The Evil in Me” which breaks off nicely from the other chaos. And the ending two part epic stoner rock / acoustic / blues (!) track “Retreat Hell” is a sign that Andy’s not afraid of venturing into new areas.

I’m a bit undecided as to what I think about “We Love You”, to be honest. It’s interesting, furious and punky, and if that’s your cup of tea you should definitely check this out. At the same time, only a handful of tracks keeps me coming back. “Love Is a Razorblade” is one of them actually, as it’s a shot of pure adrenaline. If I just embrace the inherent silliness of this band it’s apparent that they actually are skilled at creating unrelenting, fun, hard club hits.