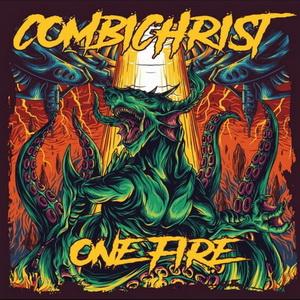 Two big industrial metal bands have decided to release their new albums within weeks of each other. The two being Rammstein and Combichrist, where the latter sees a transformation into mostly guitar based music and the former a (sort of) return to more electronics. Whereas Rammstein sound exactly like Rammstein usually sounds, Combichrist are still evolving. I just thought it was interesting to compare the two a little bit.

My view of Combichrist is that I like their middle period most, where the electronics were the heaviest, and no guitars had snuck into the music yet. I warmed up to them around “What the F**K Is Wrong with You”. I also saw them live at the Tinitus festival in Stockholm, and they blew me away. Unfortunately, on recent albums they moved into “chuga chuga guitars” territory, and I sort of lost interest again. But I have to say I really enjoy “One Fire”, because it’s a mix of both worlds.

This album is fascinating because some tracks are heavy-as-fuck electronic mayhem with Andy LaPlegua screaming his lungs out. Others are more like soft rock ballads; for example ”Bottle of Pain” complete with a beautiful orchestral arrangement. We are even treated with some kind of industrial rockabilly in the cover of Dead Kennedy’s ”California über Alles”. My favorite of the electronic variety is ”Last Days under the Sun”; a monotone yet extremely powerful masterpiece where all the elements come together perfectly. They also have an interesting guest in Burton C. Bell from Fear Factory joining in on the screaming on “Guns at Last Dawn” to great effect.

I gotta say that I applaud Combichrist’s drive to move forward and not stagnate, which happens to quite a lot of bands in the heavy electronic scene. They have evolved, and are a more interesting band for it.