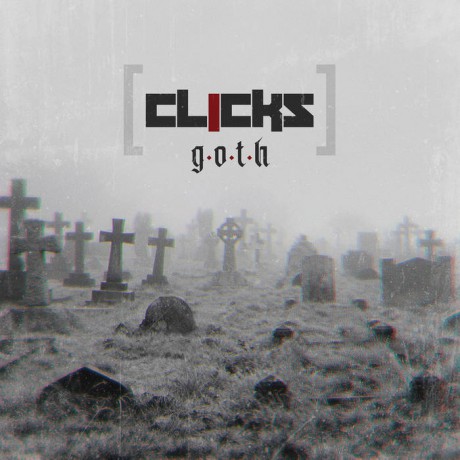 Even though we’ve covered a few Polish bands through the years, we’re not exactly spoiled with EBM and synthpop from our southern neighbor. But Clicks is back to show us there’s greatness to be found. Apparently the title “G.O.T.H.” and the album artwork are tongue in cheek ironic references to the subculture the frontman Kr-Lik (he’s clearly taking the piss) grew up in. Actually the whole album references Release-genres, with songs that are homages to both EBM à la Nitzer Ebb and electro à la Anthony Rother, with some synthpop in between.

Thing is, it’s all really well done and even though there’s obviously a lot of humour involved, it doesn’t take over. The songs are genuinely well crafted, catchy and danceable. Kr-Lik obviously knows his way around the mixing desk too, as the production is crisp, detailed and full of details. Sometimes I would like the vocals to be higher in the mix though, as they are pretty anonymous at times. Thanks to a plethora of effects and vocoders, they’re quite varied though, from the screaming in “Mr Nevergonnabe” to the robotic stylings on “It’s all About You”. I noticed this line in the appropriately named NEP pastische “Every Bloated Muscle”: “There is the youth, there is the gold”, which put a smile on my face.

As mentioned before, Kr-Lik takes us on a journey through a lot of different styles, which makes the album a rather fascinating listen one. It’s got a certain hyper electronic feel to it, and it almost only consists of dancefloor-ready material. Clocking in at 13 tracks it almost overstays its welcome, but I’ll give him a break this time. It’s hard to pick a favourite, but “Clicks.Dead” and the aforementioned “Every Bloated Muscle” comes to mind. Check it out.