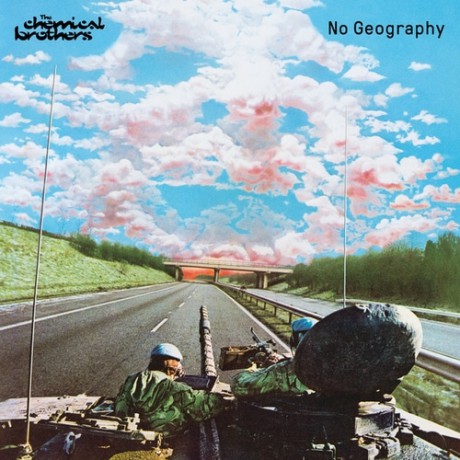 Heeeere we go! Sorry, I couldn’t resist as an introduction that classic line in “Block Rocking Beats”, but I always find it exciting when a new Chemical Brothers album gets released. To have the duo of Rowlands and Simons back at the controls and creating a new studio album is like being given a new synth for Christmas. You don’t quite know how it will sound, but, my God, you can’t wait to get it playing!

“Eve of Destruction”, the opener, has a little bit of a cross era vibe to it, as it effortlessly skips between 90:s rave stabs to 80:s electro cowbells, with a rap in Japanese thrown in for good measure (from the formidable Nene). ”Bango”, the next track, is just brilliant. It’s the kind of track I’ve kind of been hoping the Chems would do for a while – a little bit edgier, a little bit less clean and polished. Probably my favourite of a formidable set of tracks.

The title track follows, and it is one of those gorgeously-building tracks with loved-up lyrics again reminiscent of rave years, and when the beats cut in… wow! “Got to Keep on” is like a lost disco classic, with a few extra kick drums in place for good measure. It’s quite a departure from the big beat of yesteryear, but only the most hardened of souls will find that a bad thing. “Gravity Drops” brings the acid, and a little bit of a surprise in the middle of the track.

“The University Sent Me” is quite a hippyish title, and the track keeps up with that idea. It is a ”pyschadelic” groover, with the new age lyrics sung by the talented Norwegian Aurora. “We’ve Got to Try” almost starts off like a theatrical number before grizzly electronic acid forces its way through. The playfulness of the track is astounding, especially when you consider this is now album no. 9. No sign of writers block here then. Especially when you hear “Free Yourself”, which comes on like a classic electro track, that is until the order of “Dance”, when the whole track sounds like a bunch of ZX Spectrums shouting at each other. The video is great too – look out for robot versions of the Chemicals in the robot mutiny.

I envy anybody who hears the Chemicals play “MAH” live this summer, as this is bound to become a festival anthem. The tone, the lyrics, and the build up to the acid squelch chorus is designed for fists pumping into the sky. “Catch Me I’m Falling” isn’t the standard slower number to round off the album, as you might expect. It is actually quite an interesting and psychadelic little boiler themed around the singer mourning “…losing you”.

I guess you can tell by now how much I love this album. It is the Chemical Brothers at their best, as always, but with added zip – if music was athletics the Chemicals have just started to hit their stride – be prepared the rest of you festival dance acts, you’re about to get left behind… I think the Chemical Brothers have made an album so good, and so fresh that it may make some of their old output finally disappear from their sets – it is that good.