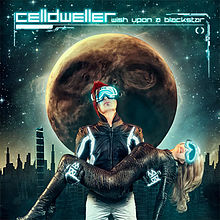 Wish upon a Blackstar

Klayton released the first, brilliant album under the name Celldweller in 2003. Since then it’s been a looong wait, until 2009 when he realized that it we would have to wait an unfeasibly long time for the follow-up, so he decided to release it in chapters with two songs at the time. After four parts, we can now finally listen to the finished result, complete with 17 (!) tracks – that means almost an album’s worth of previously unheard songs as well. Usually I’m not a big fan of such long albums but since I’ve been fed parts of it over a long time, I’ve had the chance to digest it.

Klayton and Celldweller has almost cut out his own genre these days, roughly described as a mix between hardcore electronic music, dubstep and melodic rock/metal. “Metalstep” if you will. It works surprisingly well, and Klayton’s production skills are second to none. Seriously, it really sounds awesome. Fat basslines squirms underneath guitar riffs, heavy but snappy breakbeats and the sleek, clean vocals by Klayton himself.

Thanks to its intriguing blend of genres, this album is a rare beast that might attract fans from both the electronic and metal camps. We get furious rock, dubby electronic tracks and slow ambient linking pieces. The debut album was even more varied though, as this album has a more coherent “Celldweller style”. This is both good and bad, as I love the crazy mix of the debut, but I also enjoy the more developed Celldweller.

So, this is a different beast than the debut, but it is a worthy follow-up. It’s a bit difficult for me to get an objective view on it though, since I heard the first parts of it three years ago. Those older tracks hold up great, and my favorite tracks are among both old and new songs. It’s an astonishing piece of work, and it’s a statement to Klayton’s independence – he runs his own label and online shop Fixt Music – that he could release the album this way, and do what he likes. And he does it better than anybody.

If you’re so inclined, there’s a deluxe version of “Wish upon a Blackstar” as well, with a bonus disc of instrumentals. That’s the one I’ve got, and it gives another perspective on some of the songs.