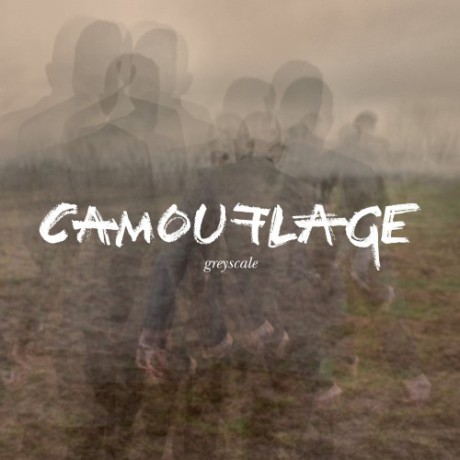 Much can be said about Camouflage, but they are never in a hurry these days. The German electropop combo had a prolific first 8 years with 5 albums released; from the classic debut “Voices & Images” to an experimental ambient excursion on “Spice Crackers”. Fast forward another 8 years and the band made a huge splash with comeback album “Sensor”, spawning hits like “Me and You” as well as “I Can’t Feel You”. Their latest album “Relocated” from 2006 followed the same solid path.

“Greyscale” has been in the works for quite a few years but as for many bands in the scene, life got in the way and time just kept ticking. What we get now, 9 years after “Relocated”, is a razor sharp execution, vocals stronger than ever and an album of compositions far superior to Depeche Mode’s latest efforts.

First single, arena synth number “Shine”, is right up there with their very best, as are a few other songs on “Greyscale”. “Laughing”, for instance, starts off slowly and builds into a gorgeous chorus section before mellowing back down again. Peter Heppner takes turns singing with Marcus Meyn on “Count on Me” and this is just stunning! I’ll leave it to you to hear it for the first time without further descriptions.

On the whole, this is a pretty laidback album with Oliver Kreyssig handling the vocals on a couple of loungy, yet gripping ballad-esque tunes. Exceptions are the rage-infused “Misery” and stellar midtempo number “End of Words”. Intertwined throughout “Greyscale” are also intrumental links between tracks that work surprisingly well.

Musically, Camouflage remain where they are most comfortable and do so brilliantly. Gloomy pop shrouded in electronics and tasteful acoustics. The intro and feel of “Still” even has a jazzy feel. The German trio still do amazing work and I for one hope this won’t be their last album. They are very apt at chiselling away at previous imperfections, making “Greyscale” their most accomplished work to date.